The Story of La Niña

HMS Gloucester was a 54-gun, third rate Speaker-class frigate. It was originally built for the navy of the Commonwealth of England during the 1650s. After the restoration of the monarchy in 1660, the ship was taken over by the Royal Navy. HMS Gloucester took part in a number of significant battles during the Anglo-Spanish War, which happened between 1654 and 1660, as well as the Second and Third Anglo-Dutch Wars.

She was wrecked in 1682 off of the coast of Norfolk, whilst carrying the Duke of York, James Stuart. He would later become King James II. The ship was due to voyage from Portsmouth to Edinburgh, allowing the Duke to conduct business at the Parliament of Scotland. Furthermore, he was set to collect his pregnant wife, Mary of Modena, and return with her to England so she could give birth there. However, early in the morning on the 6th May 1682, HMS Gloucester collided with a sandbank off Great Yarmouth. The rudder broke, and the ship was holed. 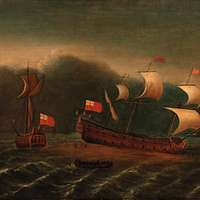 - See Above: HMS Gloucester sinking off of the coast of Great Yarmouth

The Duke of York refused to leave the ship at first, as he was certain she wouldn’t be lost. Protocol insisted that nobody was allowed to abandon the ship whilst there was a member of the royal family onboard. This led to the loss of approximately 120 to 250 lives, which the Duke of York denied responsibility for. He instead pinned the blame on HMS Gloucester’s captain, James Ayres.

HMS Gloucester’s wreckage was actually discovered by divers in 2007, however, this has only been made public this month – June 2022 – for security reasons. Fifteen years ago, it was found in international waters, 28 miles out to sea. A maritime expert at the University of East Anglia, Claire Jowitt, stated that the discovery “…can be claimed as the single most significant historic maritime discovery since the raising of the Mary Rose in 1982.”

The wreckage was successfully identified thanks to the ship’s bell, as well as clothes, shoes, navigational equipment, personal property and wine bottles. Animal bones were found, but no human remains. Interestingly, one of the wine bottles onboard bore a glass seal with the coat of arms of the Legge family. They were ancestors of the first American President, George Washington.

The shipwreck itself is split down the keel, and remains of the hull are submerged in sand. At the time of writing, there are no plans to raise the wreckage.

Brothers Julian and Lincoln Barnwell discovered the wreckage in 2007, and they mostly self-funded the dives. They were aided by their late father, and two friends; the group spent four years on diving expeditions searching for HMS Gloucester.

Upon discovering the wreckage, and now that it has been made public in 2022, Lincoln Barnwell said, “It was awe-inspiring and really beautiful… it instantly felt like a privilege to be there, it was so exciting. We were the only people in the world at that moment in time who knew where the wreck lay – that was special and I’ll never forget it.”

The brothers were inspired by their own memories of the lifting of the Mary Rose in 1982, although they themselves didn’t actually realise the significance of HMS Gloucester. They knew of the Duke of York, but that was the extent of it.

Norwich Castle Museum is currently planning an exhibition dedicated to HMS Gloucester, and it will run from February to July 2023. An accompanying research project is also set to study the circumstances of the tragedy, as well as theorise about conspiracies.

The discovery of HMS Gloucester is a significant milestone in maritime history. Savouring the heritage of any ship is always important, and Norwich Castle Museum will be doing this next year. It is the only surviving third-rate Cromwellian warship, and with the wreckage comes a great deal of historical significance. As many experts have said, this is a fantastic discovery, and perhaps one of the most important ones in a number of decades.