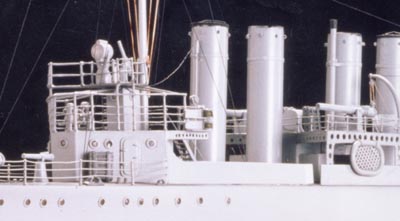 The United States Navy terminology “four piper” is a class of destroyer with four funnels, with an unmistakable silhouette. During World War I, the USS Ward was a 1,247 long ton Wickes class destroyer in the United States Navy.  She was named after Commander James Harmon Ward, the first Naval officer killed in action during the American Civil War.  Under pressure for the urgent need of destroyers during World War I, she was built in 17 ½ days.  Decommissioned after WWI, she was recommissioned for WWII, and caused the first American-caused casualty in World War II.  She engaged and sank a Japanese submarine before the attack on Pearl Harbor killing two crew members on board. The USS Reuben James, her sister ship, was lost in action during World War II.