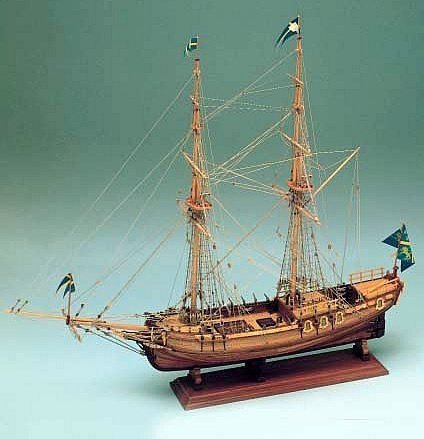 “Amphion” was the personal pleasure boat of Gustav III, the King of Sweden. She was built in 1778 at the Djurgarden shipyard in Stockholm by Fredrik Henrik Af Chapman, a famous Swedish architect. Amphion was named after the name of Zeus’s son and a patron in Greek mythology. During her tenure, the ship served as a royal yacht as well as headquarters ship. The ship was actually a modification of a frigate, known as “Turuma,” which served in the Swedish fleet. This modification led to the easy handling of the boat.

She used to carry heavy weapons, however, at the request of the King, the guns were not put on board. Unfortunately, the ship was unable to navigate in the sea properly and was too heavy for rowing. After sinking during her maiden voyage, she was used for trips over a lake. The vessel also served during the Russo-Swedish battle. It was finally demolished to serve as firewood.

The figurehead and stern castle of the Amphion along with the royal command room were not broken up, and it can be viewed at the Maritime Museum in Stockholm. These parts were preserved and restored by conservation studio “Ateljé Catellani,” between 2003 and 2006. The existing stern was added in 1791 after the ship was damaged in the Russian War.

The ship models and boat-making kits offered by us are exclusive, something which is not offered by other model builders. With the help of our creative building plan and detailed research done by our maritime experts, we are capable of building any ship model accurately. Strict quality control measures are upheld throughout the creative process. You can explore our range of boat building kits by clicking here!

We bring excellence in creating hand-picked Tool Kits. We ensure that you have the necessary tools and accessories for grooming your collection. Our toolkits include hammer, tweezers, pins, needles, blades, and much more. To view the best of our Tool Kits, please Click Here.