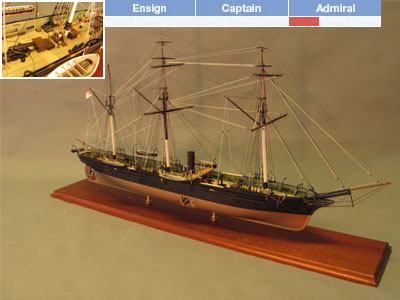 John Laird Sons and Company of Liverpool, England built the screw sloop-of-war CSS Alabama for the Confederate States of America. The vessel was fitted out as a cruiser and commissioned on August 24, 1862.  For nearly two years under Captain Raphael Semmes, the Alabama served as a successful commerce raider, attacking Union merchant and naval ships, and never docked at a Southern port. She took 2,000 prisoners and had no loss of life during those two years.  CCS Alabama had not lost a single man to accident or disease until her battle with Kearsarge.  On June 19, 1864, the CSS Alabama was sunk by the USS Kearsarge in the Battle of Cherbourg off the coast of France.

BlueJacket Shipcrafters, Inc. has been in continuous operation for many years.  The company was founded by a U.S. Navy Department architect and head of the Navy’s model shop in Washington, DC in 1905.  They are the oldest ship modeling company in the U.S.  They specialize in the design and manufacture of wooden model kits and model ship fittings. All work is performed by their craftsmen and is not outsourced.