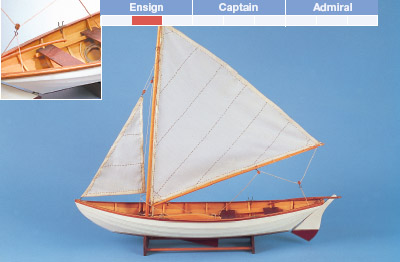 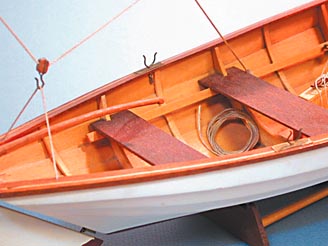 Swampscott dories were originally built by fishermen in the off season, designed to be launched off the beach.  This is a traditional fishing boat used by fishing villages along the North Shore of Massachusetts during the middle 19th century, centered on Swampscott, hence the name. The Swampscott dories were the aristocrats of dories.  They were a highly refined variant of the dory originally built as inshore fishing and lobstering vessels.  However, with their speed, ease of handling and low cost, they became popular as a recreational sailboat.  These boats were built with only four planks to a side when clear pine boards were cheap and plentiful.  A dory is a flat-bottomed boat with high flaring sides, sharp bow and a deep V-shaped transom.

This is an entry level model.

Sorry we have no extra information for this product
This Vessel Type is Fishing boat
Copyright © 2021. UK Premier ship Models. All Rights Reserved.