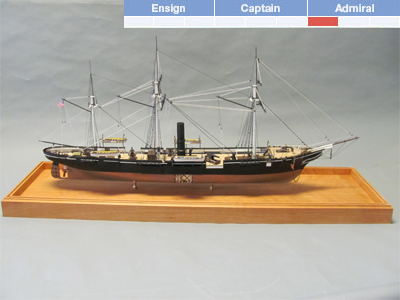 The USS Kearsarge, a Mohican-class sloop-of-war, defeated the Confederate CSS Alabama during the American Civil War off Cherbourg, France.  Under the 1861 American Civil War emergency shipbuilding program, she was built in Kittery, Maine and commissioned in 1862 with Captain Charles W. Pickering in command.  She was named after Mount Kearsarge in New Hampshire.  The Kearsarge departed Portsmouth in 1862 and headed for the coast of Spain.  She joined the blockade of the Confederate raider CSS Sumter in Gibraltar, forcing the abandonment of the Sumter there in 1862.  She prepared for her engagement of the CSS Alabama from 1862 to 1863.  In 1864, Kearsarge found the Alabama in port at Cherbourg.

On June 19, 1864, the Alabama stood out for her last action from Cherbourg Harbor.  The Kearsarge’s new commanding officer, Captain John A. Winslow was mindful of the French neutrality and took the ship out of territorial waters.  The Alabama was reduced to a sinking wreck by Kearsarge’s more accurate gunnery within one hour after the first shot.  The Alabama went down after Captain Raphael Semmes struck his colors.  He sent one of the two remaining longboats to the Kearsarge with a message of surrender and rescue.  The Kearsarge sent boats for the Alabama’s survivors.  However, Captain Semmes and 41 others were rescued by the British yacht Deerhound and escaped to the England.

Sorry we have no extra information for this product
This Vessel Type is Brig
Copyright © 2022. UK Premier ship Models. All Rights Reserved.