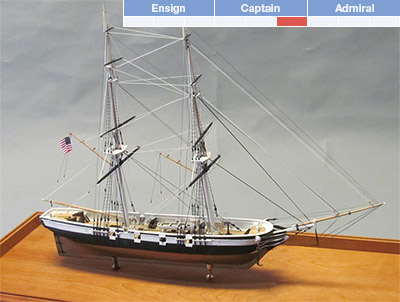 The brig USS Perry was considered the “fastest ship in the Navy” when she was launched in 1843 from the Norfolk Navy Yard, probably named after Commodore Oliver Hazard Perry.  She had various missions to include diplomatic tensions in Paraguay, blockaded ports during the Mexican American war, suppressed slave trade, and served in the American Civil War.

This kit has a carved basswood hull, photo-etched details, laser-cut parts; full plans and a 40-page instruction manual are included.

BlueJacket Shipcrafters, Inc. has been in continuous operation for many years.  The company was founded by a U.S. Navy Department architect and head of the Navy’s model shop in Washington, DC in 1905.  They are the oldest ship modeling company in the U.S.  They specialize in the design and manufacture of wooden model kits and model ship fittings. All work is performed by their craftsmen and is not outsourced.