We Will Be Attending Expo 2020 Dubai!

Winners of the 2021 Queen’s Award for Enterprise in the Category of International Trade!

This week, the exciting news was announced that the wreck of the HMS Endeavour might have been discovered on the seabed off the coast of Newport Harbor, Providence, Rhode Island. The finding of the Endeavour would unearth facts about the 200-year-old famous exploration voyages of Captain James Cook. Unfortunately, the possibility of the wreck found actually being the Endeavour is yet to be confirmed. In this blog, we explore both the hopeful prospects that the Endeavour has been found and the conflicting theories that potentially deny us from finally putting Captain Cook and his renowned vessel to rest.

The discovery at hand

Scientists and historians believe that the HMS Endeavour was one of 13 ships used to create a blockade near Newport Harbor during the American War of Independence in 1778. The exploration site where scientists say they have found the HMS Endeavour, spans a 2 mile squared area off the coast of Providence, Rhode Island; matching the agreed account of where the Endeavour allegedly sunk. Using documents from the National Archives, researchers have managed to narrow down the area where the Endeavour would be along with four other vessels.

Currently, the team is facing issues with sourcing the required funding to properly preserve the wrecks in order to abstract artifacts that would help them determine whether the Endeavour is one of the five ships. Of the five ships thought to be in the 2 square mile radius, 4 have currently been discovered, with the most recent finding believed to be the Endeavour.

Another problem the team is experiencing is that all wrecks have lots of silt, which is both difficult and risky to move as it preserves the wood over the many years it is underwater. Moreover, the large amounts of silt and location of the waterbed create poor visibility conditions for divers, making it almost impossible to carry out research that is imperative in determining whether the Endeavour has been found.

The researchers currently have plans to secure more funding and explore the fifth and final site by summer. 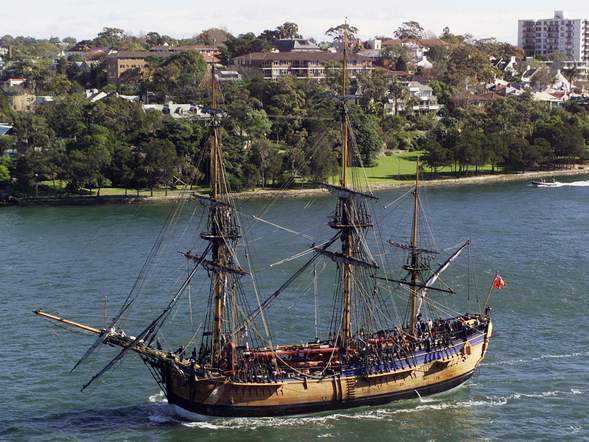 The HMS Endeavour is possibly one of the most well known ships across the world. She is commonly also referred to as HMB Endeavour, with the B standing for Bark rather than ship. Bark can be used interchangeably with Barque, which is the French version of the word, and refers to any sailing vessel that is rigged in this way.

The Endeavour and her captain James Cook helped to map out lands from the Antipodes to the Americas over the course of 3 separate voyages in the 1700’s. The picture below helps to visualize the extent of the 3 journeys and how much land was covered. Tragedy struck in 1779, when James Cook was killed in a fight against natives. 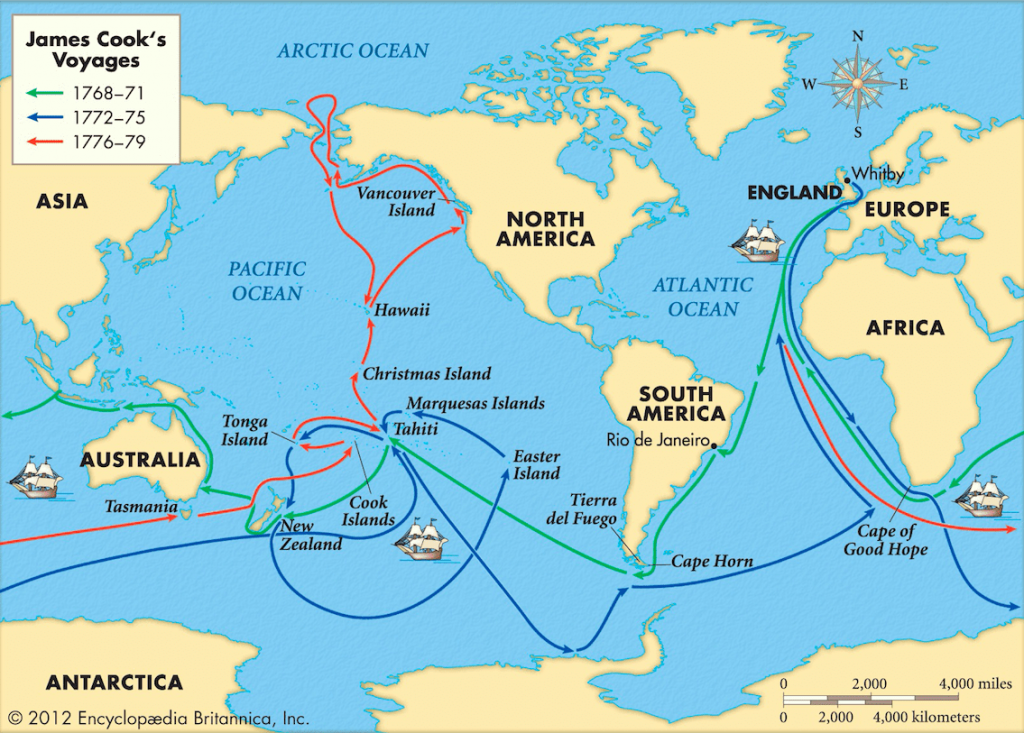 After his death, the HMS Endeavour was returned to England, where she was renamed Lord Sandwich and privately sold. Eventually the Royal Navy used her as a transport ship. This is where scientists believe the journey of the HMS Endeavour ends; with the Royal Navy utilizing her as a transport ship in the American War of Independence and then being scuttled off the coast of Providence.

Could scientists be looking in the wrong place?

In 1975, the Captain Cook Society was founded. It currently has 400 members worldwide, with all the executive officers being based in the UK. The community has an avid following and there are various theories proposed across the website that suggest the HMS Endeavour could be elsewhere entirely.

Some believe that the HMS Endeavour is actually on the bottom of the River Thames, in London. Situated somewhere between Woolwich and Greenwich, the theory suggests that the Endeavour was being used as a receiving home for female convicts and then belonged to an old pensioner and his family. The pensioner would allow members of the public to explore inside the Endeavour, allegedly making a rather comfortable living off the interest of others in the year of 1825. If this theory is correct, then 1825 is a long time after the agreed account of the Endeavour sinking in 1778.

Another theory suggests that the ship was acting as a transport ship, but under a new name and in Rhode Island. She hit ground on a routine mission and sunk in 1794. If this theory is true, then scientists are looking in the right area, but the possibility that the ship would be one of the five in the 2-mile square radius they are currently excavating seems unlikely. Furthermore, with the theory proposing that the ship was still afloat 16 years after scientists believe she sank, then that’s many years of history important for determining her resting place unaccounted for. 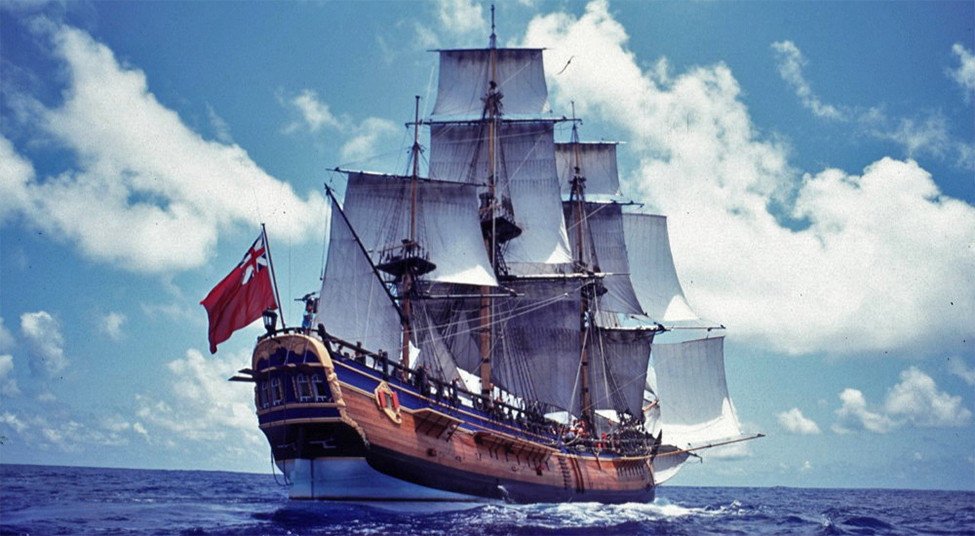 If none of the 5 ships discovered are the HMS Endeavour, then what are they?

Members of the website discuss this question as well. They propose the existence of two other Endeavours on the British Admiralty’s books and that the ship found in Newport could be one of them. The first of these ships could have been trading between London and the US. The second could have been a warship sold in 1783 and misrepresented as Captain Cook’s Endeavour in order to sell it. Alternatively, Captain Cook’s other ship the HMS Resolution could have been one of the ships recently discovered in Newport.

Despite this, scientists remain optimistic that their discovery is Captain Cook’s HMS Endeavour, based on the evidence of the ship being renamed Lord Sandwich and the fact that there are 5 wrecks on the seabed, increasing the possibility that one is the Endeavour. 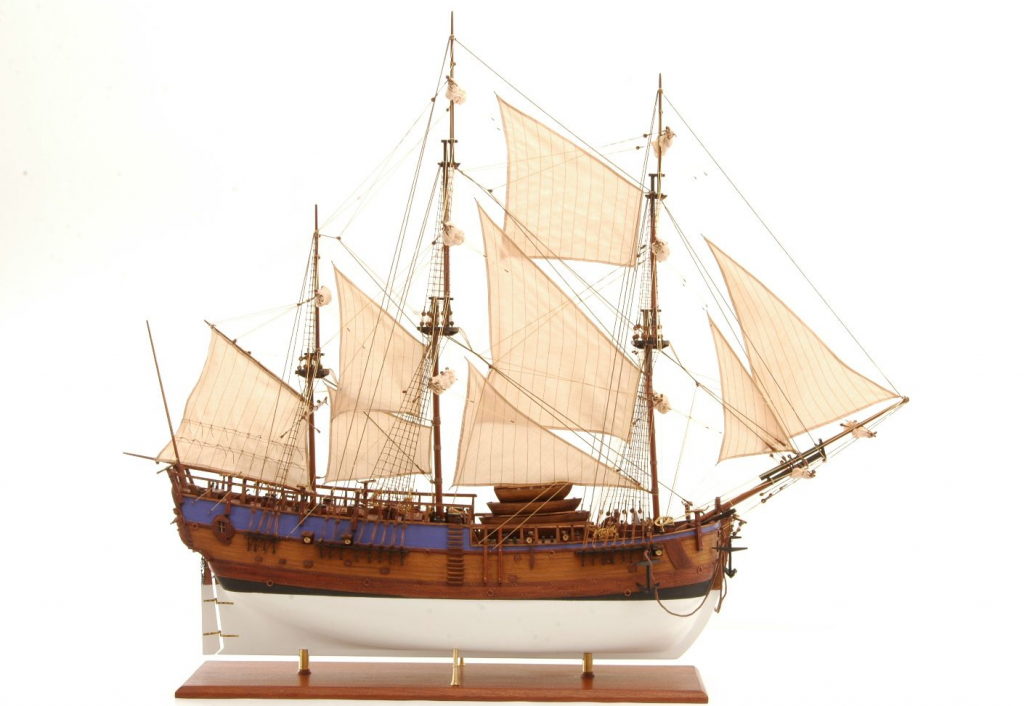 With the fate of the Endeavour still undetermined, we must now wait for scientists to complete their excavations to find out whether the famous vessel has been found or not. One fact remains, and that is that the HMS Endeavour will never be forgotten, found or not. The ship and her captain are famous for helping to map out the world, and that is why they will both continue to live on. That is why Premier Ship Models are also honoring her throughout the month of May by offering up to 15% off our Premier and Superior range model ships of the HMS Endeavour.

To apply the discount, simply enter the answer to the question below in the voucher code box at checkout:

What is the first name of the HMS Endeavour’s captain?

We hope you enjoyed this week’s blog and please remember to follow us on social media using the links below to stay up-to-date with all the happenings, discounts, and release of new models.