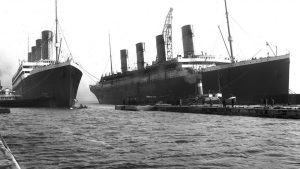 See Above - The Titanic (right) and her sister ship, the Olympic (left)

It must be said, that these theories are just that; theories. Nevertheless, it can certainly be very interesting to talk about.

The RMS Titanic was a British passenger liner that set sail on the 10th April 1912, and was owned by American tycoon J.P. Morgan. It departed from Southampton and was due to arrive in New York City. At an estimate, around 2,224 passengers were onboard.

On the 15th April 1912, tragedy struck. At 11:40pm, on the 14th, the ship’s lookout Frederick Fleet spotted an iceberg immediately ahead, blocking the Titanic’s course. Upon alerting the bridge, First Officer William Murdoch ordered the ship to be steered around, and he wanted the engines to be reversed. However, the call came too late, and the ship collided with the iceberg. A series of holes punctured the Titanic below the waterline. The iceberg itself didn’t actually pierce the hull, instead, it dented it. The hull’s seams buckled and separated due to the pressure from the dents, and the inflowing water.

It very quickly became clear that the ship was doomed, as water breached five of the ship’s watertight compartments. Anything more than four compartments being flooded was catastrophically fatal, and so the ship began to sink bow-first. Water spilled from compartment to compartment as Titanic’s angle in the water became ever-steeper.

The Titanic itself was actually very poorly prepared for such an emergency, regardless of the ship’s structural integrity. There was an immense shortage of lifeboats, and had the boat been full to its capacity of 3,339 passengers and crew, only a third of these would’ve been able to be accommodated in a lifeboat. Furthermore, the crew hadn’t received any training, and the officers didn’t know how many people could safely board the lifeboats, and so many were launched only half-full. Third-class passengers were fending for themselves below deck, and many of the male passengers and crew were left aboard, as the ‘women and children first’ protocol was largely being adhered to.

A little over two hours after the Titanic had struck the iceberg, the rate at which it was sinking began to increase exponentially and violently. As the unsupported stern rose out of the water, the ship essentially broke in two, between the second and third funnels. All the remaining passengers and crew were submerged in ice-cold water, approximately -2 degrees Celsius. Such sudden immersion causes cardiac arrest and almost makes it impossible to breathe. It also causes something called cold incapacitation, which isn’t hypothermia, but instead is the bodily reaction to hypothermia, and ceases all control over bodily functions. The main cause of death was cardiac arrest within fifteen to thirty minutes. Of all the people stranded in the water, only five were helped into lifeboats. As a unit, the lifeboats had room for 500 more people.

Distress signals were sent via wireless, lamps, and even flares, but no ships were near enough to reach the site of the disaster before Titanic sunk entirely. At approximately 4am, RMS Carpathia arrived on the scene. 710 people survived, while at least 1,500 were killed. The captain of the Carpathia described the place as an ‘ice field,’ and passengers described it as ‘the middle of a vast white plain of ice, studded with icebergs.’ Coincidentally, the site of the wreckage is now known as Iceberg Alley.

So, what does any of this have to do with J.P. Morgan? There are two theories that feature prominently, and they tie in together. The first of which being that J.P. Morgan had a sinister plan to kill all of his rivals, and the second being that the Titanic was actually another ship; the Olympic, and it was deliberately sunk to claim the compensation. 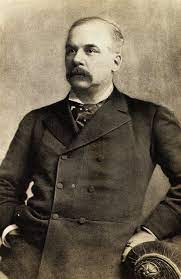 The latter starts with the fact that the Olympic was damaged while sailing from Southampton to New York in September 1911. This was the exact same route that the Titanic would voyage on a year later. Due to these damages, the Olympic had to return to a shipping yard in Belfast. Harland and Wolff, the company who owned the shipping yard, managed to repair the Olympic, and it sailed to New York and back. It then returned to Belfast for more repairs in March 1912, and this was a mere few weeks before the Titanic set sail.

The reason behind people thinking that the ship that sunk isn’t really the Titanic dates back to the 20th September 1911, when the Olympic collided with the HMS Hawke, off of the coast of the Isle of Wight. Many problems arose for White Star Line, the owners of the ship, and J.P. Morgan was on the board of White Star Line. The Olympic had to be taken out of service while they repaired it, and this subsequently resulted in the postponing of the Titanic’s maiden voyage. At the time, White Star Line couldn’t afford this at all due to looming legal bills, as well as the cost of repairs on the Olympic. Therefore, White Star Line had to formulate a plan to not only claim back the money they’d lost from the collision, but also the loss of revenue from the out-of-service Olympic.

Their plan was to switch the damaged Olympic with the new Titanic, sink it and claim back the compensation. There are allegations that the Olympic’s floors were covered with carpet to look brand new, parts like the B deck were switched out for the Olympic’s promenade, and even some suspected incidents concerning passengers reporting technical problems with the ship way before the iceberg hit. 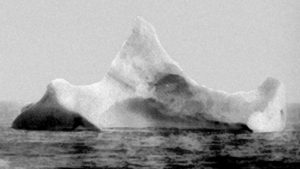 Knowing how damaged the Olympic was, J.P. Morgan went one step further and ensured all of his competitors were onboard, namely Jacob Astor, Isidor Straus and Benjamin Guggenheim. Morgan himself was due to travel on the Titanic, but cancelled just one day beforehand. He had said he had fallen ill, but he was spotted in France two days earlier looking well. Not only this, but he also removed several valuable bronze statues that were in his possession aboard the ship before it set sail.

Moreover, one damning allegation traces back to the shipyard in which the Titanic was built and the Olympic was repaired; Harland and Wolff in Belfast. In later years, they had openly stated that the two ships were actually swapped, but were threatened and if they ever said anything, ‘it would be their last job.’

Another unusual piece of information is that when the supposed Olympic was decommissioned in 1935, segments of its wood panelling, and other parts like the Aft first-class staircase, were taken and used in the White Swan Hotel in Alnwick, UK. The panels that were used depict the number 401, however, this number was registered to the Titanic when it was being built, and the Olympic had been given 400. If that ship was the Olympic, it should have been branded with the number 400.

Additionally, all advertisements preceding the Titanic’s voyage actually illustrate the Olympic. Every time a picture was used, it was in reference to the Olympic. People have theorised that this was all part of the cover-up and switch by White Star Line, to convince the passengers that it was in fact the newer model.

Of course, these theories are mere speculations, and regardless of what you do or don’t believe, what happened on the 15th April 1912 was truly tragic. The memory of those lost in the wreckage has been commemorated and celebrated many times over the years, and the excellent 1997 film paid homage to the horrors and difficulties the passengers faced. The two sister ships of Titanic and Olympic were indiscernible aside from a few minute details, and so it’s hard to say whether this theory will ever be debunked or confirmed, but it is nevertheless interesting to speculate on.