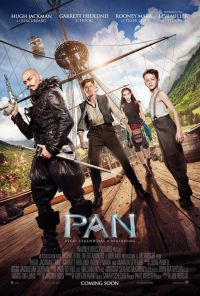 Over the past few years, remakes of classic Disney films have been flooding our cinema screens, with such titles including Cinderella and Maleficent. The new releases have done a great job of recreating our childhood memories with a superb addition of great acting and attention-holding special effects.

The latest addition to this running series is Pan (2015), a retelling of the classic story of Peter Pan. Peter Pan is the story of an orphan boy (Levi Miller) who discovers the mysterious world of Neverland. Upon unearthing this magical world, his journey in to Neverland begins, living out his destiny as the boy who plays a pivotal role in the prophecy of how Neverland’s arch-nemesis Blackbeard (Hugh Jackman) will be taken down.

We were commissioned to provide some model ships for the Pan movie. The models are all built to scale and used to replicate real flying pirate ships in the movie. The completion of this project added another happy customer to our growing list of corporate clientele and movie-featured ship models. We are all excited to see the movie, which hits screens on October 9th in the UK.

Below you can watch the trailer: