Premier Ship Models have recently partnered with Andrew, an excellent modeller who hand-makes all of his products for a more personal touch. His company is run solely by him, and he has always held a penchant for both ships and model ships alike. He has been sailing for seven years, and crafting models since the age of five! His passion for work is reflected deeply in every single project, with the aforementioned hand-made technique demonstrating how intricate and careful he wants to be with his work. Upon asking Andrew why he prefers hand-made, he said, “It’s a much better way to get a feel of the ship, to learn it and whatnot.” 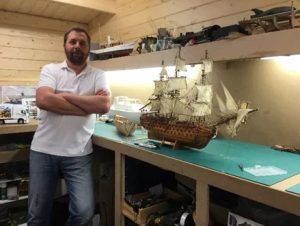 Whilst Andrew hasn’t yet delved into the world of 3D printing, he is looking to expand into the field. However, the quality of each and every model is highly important to him, and so the printers would only serve as a way to accommodate his workload and meet deadlines. They wouldn’t substitute his own building techniques, as he much prefers building the models with his own two hands. In particular, his company specialises in old-fashioned boats, and ships spanning across the 17th to 19th Centuries have always been favourites.

It’s important to note that Andrew has also done some incredible work on more modern pieces, and even vehicles such as planes, cars and helicopters! One project in particular was highly impressive – HMS Fearless.

The boat itself was a Royal Navy amphibious assault ship, and it was in service between the years of 1965 and 2002. Most notable about the ship is the fact that she was the last ever steam-powered surface ship in the Royal Navy. Furthermore, HMS Fearless was an integral part of the Navy committed to Operation Corporate in 1982, more widely known as the Falklands War.

It was fitted with a plethora of modern satellite communications equipment, making her one of the most advanced ships of her time. Her first task was acting as a command platform for British Counter-Terrorism operations in Aden, a former colony of the British Empire near Yemen. After Aden, HMS Fearless hosted talks between British Prime Minister Harold Wilson and Ian Smith in 1968, to determine the future of Zimbabwe, known as Rhodesia at the time. Ian Smith, who was Prime Minister of Rhodesia, had decided to declare independence from Britain. A final piece of trivia regarding HMS Fearless is the fact that she appeared in the 1977 James Bond film, The Spy Who Loved Me, cementing its place in media history and reflecting the ship’s importance.

Andrew successfully managed to capture every intricacy, every finite detail and every characteristic in their rendition of HMS Fearless. Its flawless structural integrity and shape are perfect reflections of the real-life counterpart, and the entire project is a fantastic testament to Andrew’s passion for his work. 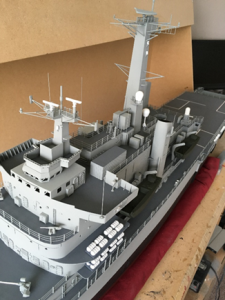 - See Above: A closer look at the deck of HMS Fearless 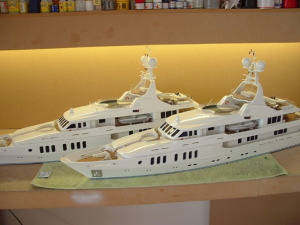 - See Above: The pair of Talisman Chartered Yachts

The level of intricacy displayed above is second-to-none, with even the tiniest of details captured to a tee. Exquisite outdoor spaces are seamlessly complemented by the crisp white paint and tinted windows, as well as low-profile glass shields to deflect the wind.

These two incredible, very different projects reflect Andrew’s versatility as a model ship builder, and he completed both on time and to an amazing quality. Premier Ship Models couldn’t be more thrilled about this partnership, and we can’t wait to explore the amazing opportunities that arise as a result of this!