With the invention of satellites and the development of ship technology; modern day sailing is much less dangerous than it used to be. Hundreds of years ago ships would set sail with nothing but the unforgiving ocean ahead of them, they had no ability to communicate with land, nobody to tell them if there was a storm coming and in the event of a disaster it was their job to find safety. It is for reasons such as these combined with high quantities of traffic sailing through popular routes that make certain areas the model place for finding numerous shipwrecks. Places like this, such as the Cham Islands in Vietnam, are commonly the sites of naval excavation and attract archaeologists from across the world. The work they do uncovers a treasure chest of forgotten ships and provides us with an interesting insight in to the ancient world.

In Disney’s Pirates of the Caribbean, there is a majestic and fascinating location known as ‘Shipwreck Cove’ where pirates from across the world meet to discuss their strategy for fighting back against the British. This location is the result of intelligent CGI and a vivid imagination, in the real world, no such place exists, or does it?

There are certain areas such as the Cham Islands in Vietnam, which are renowned amongst archaeologists for being locations where many ships met their maker. These relatively small areas are home to a large number of shipwrecks effectively making them a real world ‘Shipwreck Cove’.

So why is it that shipwrecks are contained in to such small and specific areas such as The Cham Islands? The first reason is that the islands are one of the busiest ancient shipping routes in the world. The Moluccas to the east of Borneo are well known for being very fertile spice islands. Merchants would travel from here to China to trade spices with silk, tea and ceramics. This is why broken ceramics are frequently found along beaches in the Cham Islands, with one beach called Quang Ngai being the location of an astonishing eight shipwrecks which had washed ashore over time.

The quantity of traffic flowing through the Cham Islands is not the only reason for the large number of shipwrecks in this region. Other factors have contributed to the increased level of danger in the passage, for example the extreme weather conditions. In 2013, there were 9 typhoons and without the presence of satellites to predict the weather and coastline technology to warn ships out at sea, these extreme weather conditions would have made sailing extremely dangerous.

To make matters worse, ships would often drop their anchor in bays around The Cham Islands, either to protect themselves from what they thought was an approaching storm or to resupply their boats. When the storms eventually reached them, with their anchors dropped getting out of the bay was almost impossible. Being stationary in the bay left them defenseless, and this is another reason why a lot of shipwrecks are found along or near the beaches. 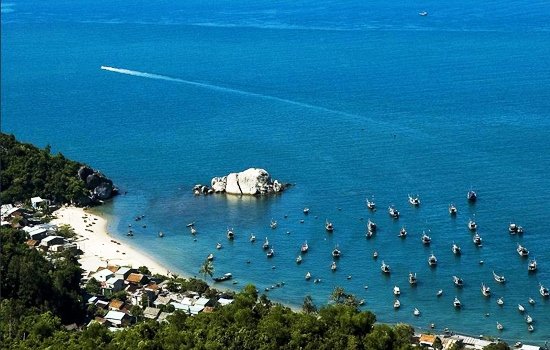 The large number of shipwrecks in this area has attracted attention from naval archaeologists all over the world. One of the first wrecks found was the Vun Tau in southern Vietnam. It was discovered by some fortunate fisherman off the islands of Con Dao. After lifting the wreck from the sea bed, it was discovered that the starboard side of the hull was in good condition and later recognised to be the shape of a lorcha, a ship with Eastern and Western influences. It was the first shipwreck of this kind found and led to the discovery of 48,000 blue and white porcelain ceramics. These pieces were later auctioned for a staggering 4.7m pounds (or 8.9 million Australian dollars).

What later became known as the Hoi An hoard led to the finding of more blue and white ceramics in The Cham Islands, each one decorated with dragon and floral patterns. Over 250,000 objects were found and were determined to likely be from a Chinese trading vessel. You can now buy one of the pieces on Ebay for as little as 30 pounds.

The high value of the items found on these shipwrecks encouraged people to actively go out and attempt to discover wrecks of their own, which gave rise to them being labelled as ‘treasure hunters’. These treasure hunters were solely out for their own gain and did not appreciate the value of these items that went far beyond their commercial value. 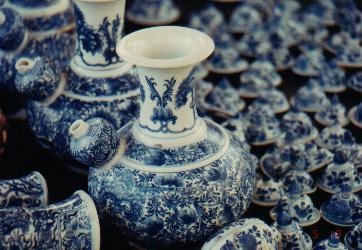 The Cham Islands are not the only region in the world where large numbers of ships have made the terrifying journey to the seabed. The Paracel Islands in South China is an area known for being a popular historic trade centre. The islands attracted traffic from Europe because Europeans wanted a piece of the lucrative trade that took place there, and at the time the islands were relatively unknown meaning merchants were able to beat their competitors.  As with the Cham Islands, what appeared as a paradise was in fact a nightmare, the name of the islands ‘paracel’ being a French phonetic notation referring to the dangerous rocks in the region.

Furthermore, Palembang, the capital city of the south Sumatra province in Indonesia prospered in the ancient world as a centre of trade between the east and west. Traditionally, pepper is what attracted merchants from across the world, with 50,000 pounds of white pepper being traded annually. As was the case with The Cham Islands and The Paracel Islands, the large quantity of traffic in this region resulted in multiple ships sealing their fate.

At the time these regions were considered a nuisance by merchants, and considering the loss of life were in fact much more than that. However, these regions have provided modern historians and archaeologists with a highly lucrative source of information and understanding. The items found inside these shipwrecks have helped us to shape the ancient world and learn more about what took place in the commercial environment. It is for this reason alone that it is of vital importance that ‘treasure hunters’ do not stumble upon any shipwrecks, as they will use what they discover there for monetary gain. It is imperative that we allow archaeologists to excavate these sites and continue to develop our understanding of history. Currently we have only scratched the surface, with many more shipwrecks out there it is exciting to consider what secrets they contain.