The Ship of the Future

The HMS Queen Elizabeth recently made headlines around the world after she was released from dry dock on the 17th July. This event is not the first time the HMS Queen Elizabeth has featured in the media, having already attracted much attention over this year; mainly due to her sheer size and scale. She is the largest UK warship ever built and will be launched as soon as 2020.

A brief history of the project

The HMS Queen Elizabeth was commissioned in 2008 by Defence Secretary Des Browne, along with her sister ship, now named the HMS Prince of Wales. It was a joint project between Babcock, Thales, BAE Systems and the Ministry of Defence; the first time that these four had joined together to work on a single model.

Construction of the ship began in 2009 and took place across six shipyards in the UK. In August 2011, the lower block of the HMS Queen Elizabeth was transported to the Rosyth dockyard, where it was recently moved from dry dock. The ski  jump was added in November 2013. The project is now on-going, with only 80% of internal fittings completed. She is on track to be finished by 2016, where she will undergo sea trials, eventually being launched in to action in 2020. 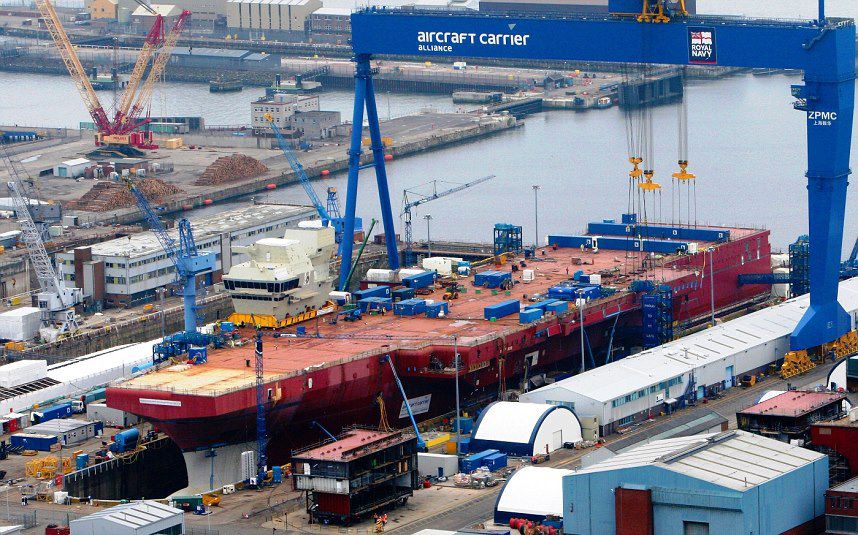 The magnitude of the HMS Queen Elizabeth:

– Taller than Nelson’s Column and wider than the M25.

– An estimated cost of over 6 billion pounds.

– A very advanced radar system – capable of tracking 1,000 targets at any one time, including a tennis ball travelling at 2,000 mph. 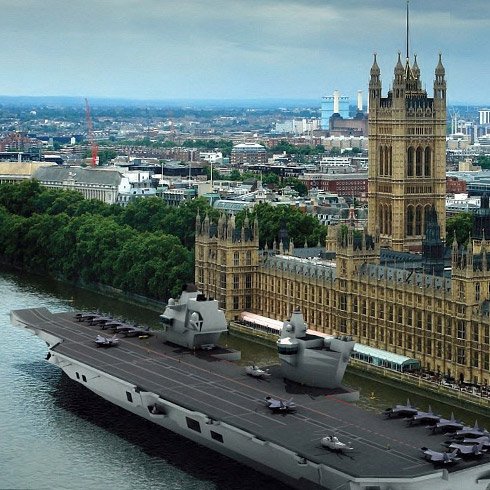 This digital image demonstrates the magnitude of HMS Queen Elizabeth by comparing it with the Houses of Parliament. (Source: Royal Navy)

What purpose does she serve?

However, the Royal Navy argues that the HMS Queen Elizabeth serves a purpose far beyond simply protecting UK borders. As a country that relies on the sea for 95% of its economic trade, having a naval presence is extremely important. They argue that, ‘To question why the UK needs an aircraft carrier is to ignore the realities of being a significant player on the global stage with peacetime, wartime and humanitarian responsibilities’.

They go on to say, ‘When all is said and done, how does a country show it is serious about its plans and ambitions? This is the driving question behind any aircraft carrier. Because an aircraft carrier backs up the words of its leaders with an indisputable presence – and, when necessary, action’.

The Royal Navy believe that the HMS Queen Elizabeth protects the prosperity of the UK by ensuring that the UK navy continues to be seen as a threat. Her commanding officer, Simon Petitt, says that, ‘to deter you must have a credible force’.

In other words, the HMS Queen Elizabeth’s most important purpose is continuing the legacy of the Royal Navy and ensuring that the UK remains a reputable player in naval warfare. In doing so, she will ensure the prosperity of both UK trade and ultimately, the livelihood of its citizens. 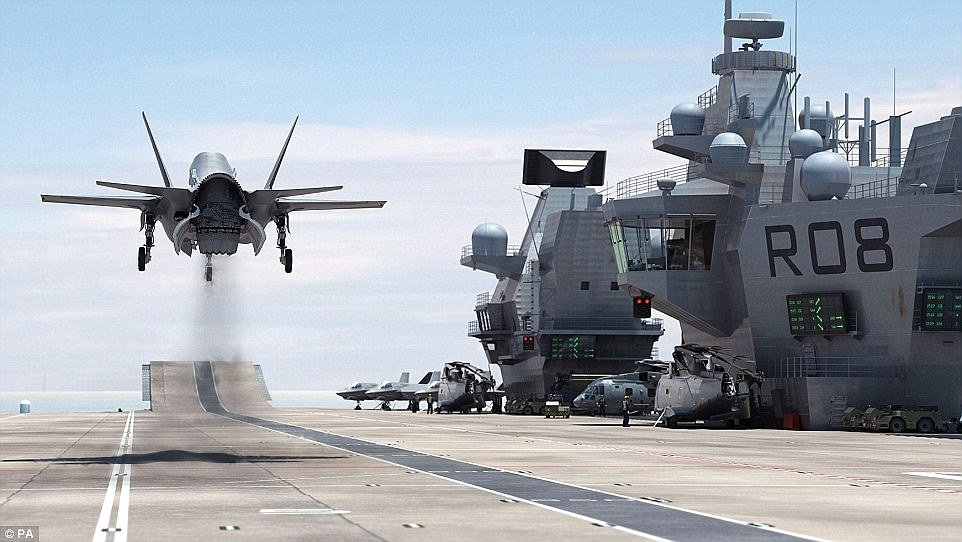 This digital image is a representation of how aircraft will take off from the HMS Queen Elizabeth. (Source: Daily Mail)

Is she really worth the cost?

In a time when the global economy is only beginning to recover, at a cost of 6 billion pounds, is this ship an investment that is truly worth it? The Royal Navy would argue that, because of the reasons mentioned above, she is an entirely worthwhile investment. They will argue that she may cost a lot but without her, potentially UK trade which takes place almost entirely at sea, may suffer.

Furthermore, as an island nation, it seems logical that the UK would invest the majority of its military spending in to its navy. Because of this, it is a worthwhile investment; it is not as if the UK is a nation with no access to the sea or that the UK is investing 6 billion pounds in land units.

Finally, as mentioned earlier, the HMS Queen Elizabeth has a life expectancy of 50 years. When broken down, it works out that the UK is paying 120m a year for the HMS Queen Elizabeth, disregarding the costs to run her. The cost of 120m a year ensures the protection of UK borders, the stability and prosperity of UK trade, and the legitimacy of the UK’s navy. Not only does she provide the UK with all of these benefits but she further provides these services for 50 years, meaning her costs are definitely worthwhile.

The future of the HMS Queen Elizabeth

Having addressed both her enormous size and her potential, it is somewhat frustrating that we have to wait another 6 years before she is finally launched. This is also assuming that there are no setbacks to the progress of her completion, which hopefully there are not. Thankfully, the HMS Queen Elizabeth is on schedule.

What makes this ship so exciting is that the HMS Queen Elizabeth is a ship of the future. On a UK scale at least, nothing like her has ever before existed. It seems fitting that her name should be Queen Elizabeth, because she will be the head of the Royal Navy. We at Premier Ship Models look forward to seeing her completed, and perhaps one day we will have the opportunity to create a model replica of this truly inspiring vessel.

Do you think that the HMS Queen Elizabeth is a worthwhile investment for the UK? Are you excited to see her completed, and have you been following her progress? Let us know in the comments below.

You can read more here:

Watch a video of the HMS Queen Elizabeth being moved from dry dock: