HMS Neptune was a 98-gun second-rate ship of the line of the Royal Navy. Neptune served on a multitude of various stations throughout the French Revolutionary and Napoleonic Wars. She was also present during the Battle of Trafalgar, which took place in 1805.

During the early years of the war with Revolutionary France, HMS Neptune was built, before being launched in 1797. HMS Neptune was commissioned on the 25th March 1797, under Captain Henry Stanhope, and it was actually the third ship in the Royal Navy which bore the name of Neptune. Stanhope then sailed from Woolwich in June of the same year, and he flew the broad pendant of Commodore Sir Erasmus Gower, before heading towards the Nore.

Instantaneously, she was close to getting swept up in the events of the mutiny at the Nore. This was one of two in a series of mutinies by sailors of the Royal Navy in 1797, alongside the Spithead mutiny. Whilst the Spithead mutiny was largely peaceful, the Nore mutiny was incredibly radical. 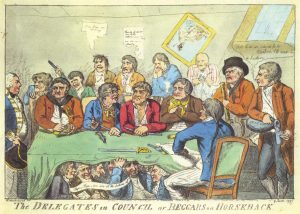 - See Above: The Mutiny at the Nore

Whilst stationary at Gravesend, Neptune and two other 64-gun ships, HMS Agincourt and HMS Lancaster, as well as an entire fleet of smaller gunboats, were all ordered to intercept and assault the mutinous ships at the Nore. However, before they even began, word had arrived that the mutineers had started negotiations with the Earl of Northesk, who was captain of HMS Monmouth. By the 9th of June, the mutiny had completely collapsed and dissolved. As a whole, the attack was called off, and on the 21st September 1797, Gower surpassed Stanhope as captain of HMS Neptune. With the crisis at the Nore concluded, Neptune connected with the Channel Fleet.

Gower retained his captaincy for a couple of years, until he was promoted to rear-admiral of the white. Herbert Sawyer took the reins as acting captain for a number of months, until Captain James Vashon was formerly appointed on the 5th March 1799. Neptune spent the former half of 1799 with the Channel Fleet, before she was tasked with joining fourteen other ships in the Mediterranean, as part of Vice-Admiral Lord Keith’s fleet. HMS Neptune then spent the remainder of the French Revolutionary Wars in the Mediterranean.

A few years later, in 1804, HMS Neptune was being sailed by Captain Sir Thomas Williams. She was deployed with the Channel Fleet once more, and was tasked with blockading the French Atlantic ports. However, as Neptune continued to blockade the port, Sir Williams’ health deteriorated to a proliferate degree, before he eventually had to return to Britain in May 1805. His replacement was Captain Thomas Fremantle, and Neptune was ordered to blockade Ferrol. This was after the Franco-Spanish fleet had arrived after the Battle of Cape Finisterre, in which around 39 British lives were lost, and 476 Franco-Spanish lives were lost. A further 800 people fell ill, but with all the bloodshed, the battle as a whole was actually inconclusive, with both admirals claiming victory.

After this, Neptune formed part of the weather column in the Battle of Trafalgar on the 21st October. It was the third ship from the lead, and was positioned between HMS Temeraire, and HMS Leviathan. Neptune sailed into battle and Fremantle unleashed devastating force on the French flagship, Bucentaure. Neptune fired cannons on the port-side, and further disabled Bucentaure. Moments after, Fremantle turned hard to fire another volley into the Bucentaure at less than 100 yards, sinking her swiftly. 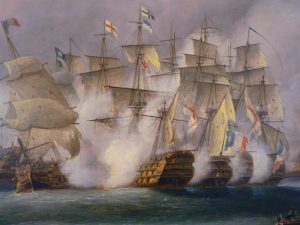 - See Above: The Battle of Trafalgar

Fremantle then spotted the enormous Spanish four-decker Santisima Trinidad, and noted it was sailing away. Fremantle took the offensive path, steering towards the Spanish ships starboard hoping to rake the stern. Neptune opened fire and debris was scattered across the sea. Both ships exchanged heavy fire for over an hour, before Neptune was aided by a multitude of other British ships, namely HMS Leviathan. The overwhelming force was too much for Santisima Trinidad, and she was too severely damaged to go on. Santisima Trinidad surrendered to the British forces, with 205 casualties and 103 injuries.

Following this battle, Neptune then had to endure yet another confrontation with the French ship, Intrepide. Neptune was considerably damaged, with the majority of the rigging sliced to pieces, and the hull taking on water. However, Neptune never fell, but she did sustain ten casualties.

Years later, in 1810, Neptune found herself in Plymouth. Her hull was deteriorated, and she was quickly deemed unfit for service. A proposition to convert Neptune into a prison ship was floated in 1815, and the Admiralty accepted the proposal. Neptune spent the final three years of her life as a prison ship, before being dismantled in October 1818.

The story of HMS Neptune is one of sheer tenacity and steadfastness. She sustained many casualties, and inflicted a great deal of damage too. But through each struggle, HMS Neptune continued to sail.

The model being built is a terrific reflection of this legacy. These above pictures demonstrate the level of intricacy that’s required, especially in the early stages. It’s a steady and careful process, but good progress is still being made to ensure the accuracy of this model. The hull is sturdy and broad, and they act as excellent foundations for the rest of the ship model. We’re all greatly looking forward to the end product, and are sure it’ll be more than satisfactory!