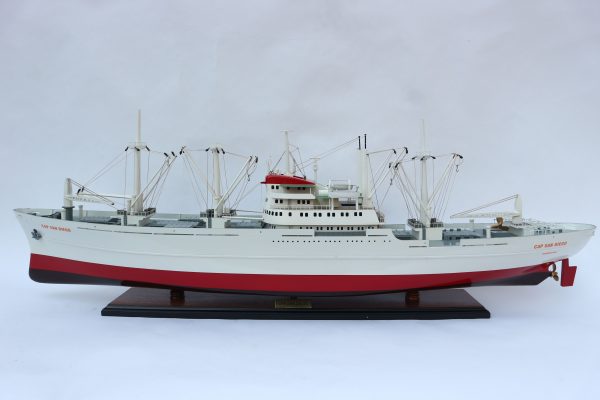 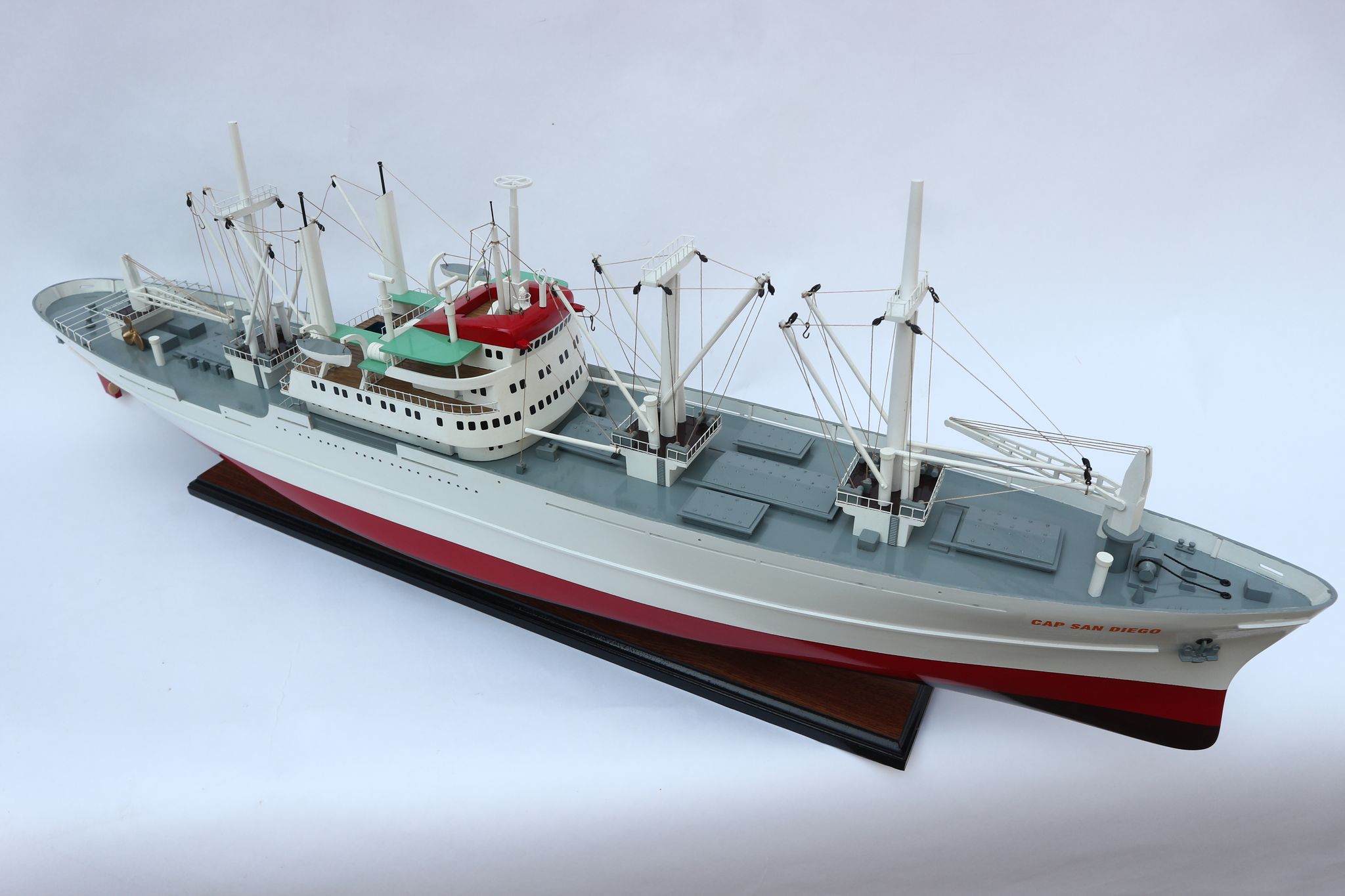 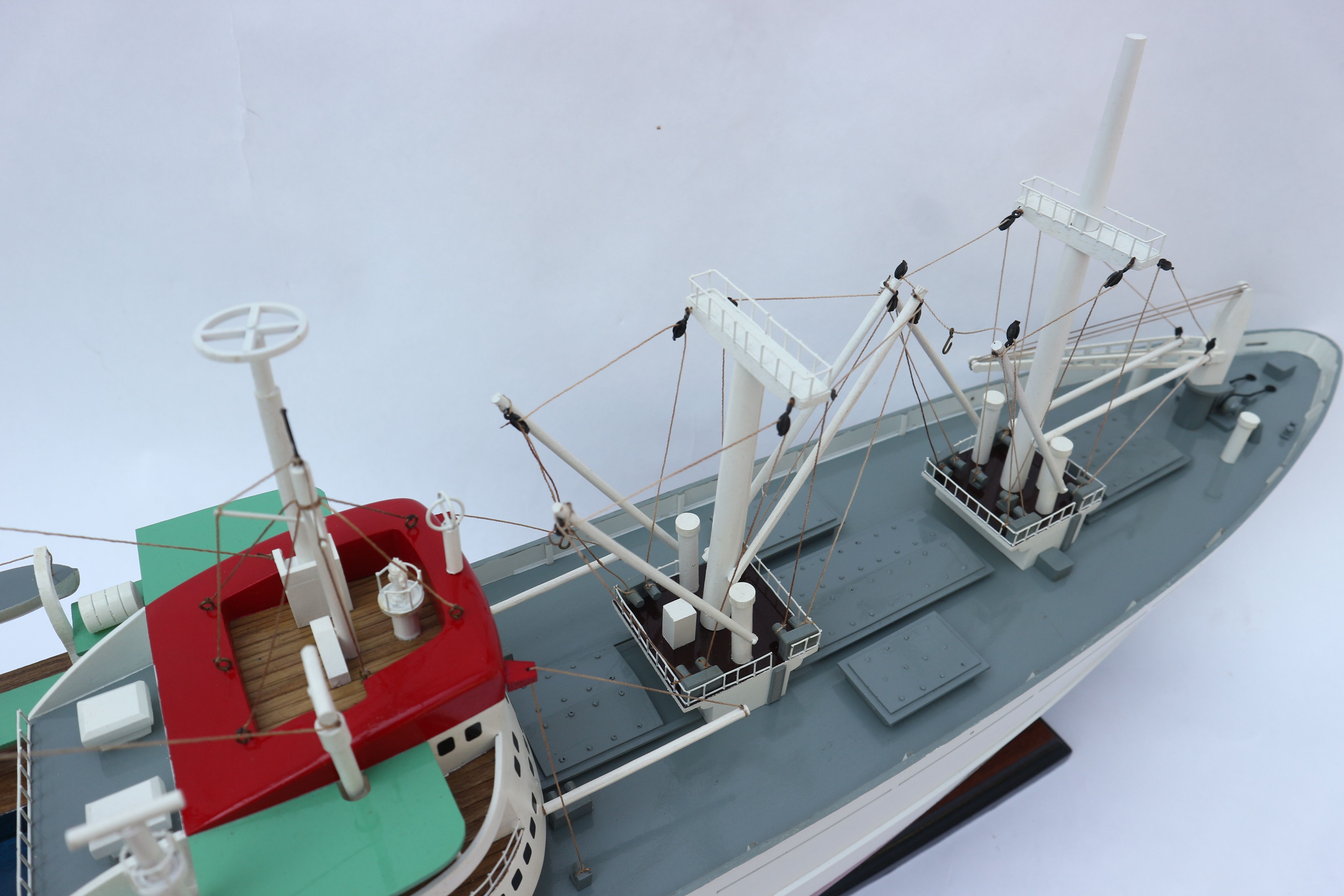 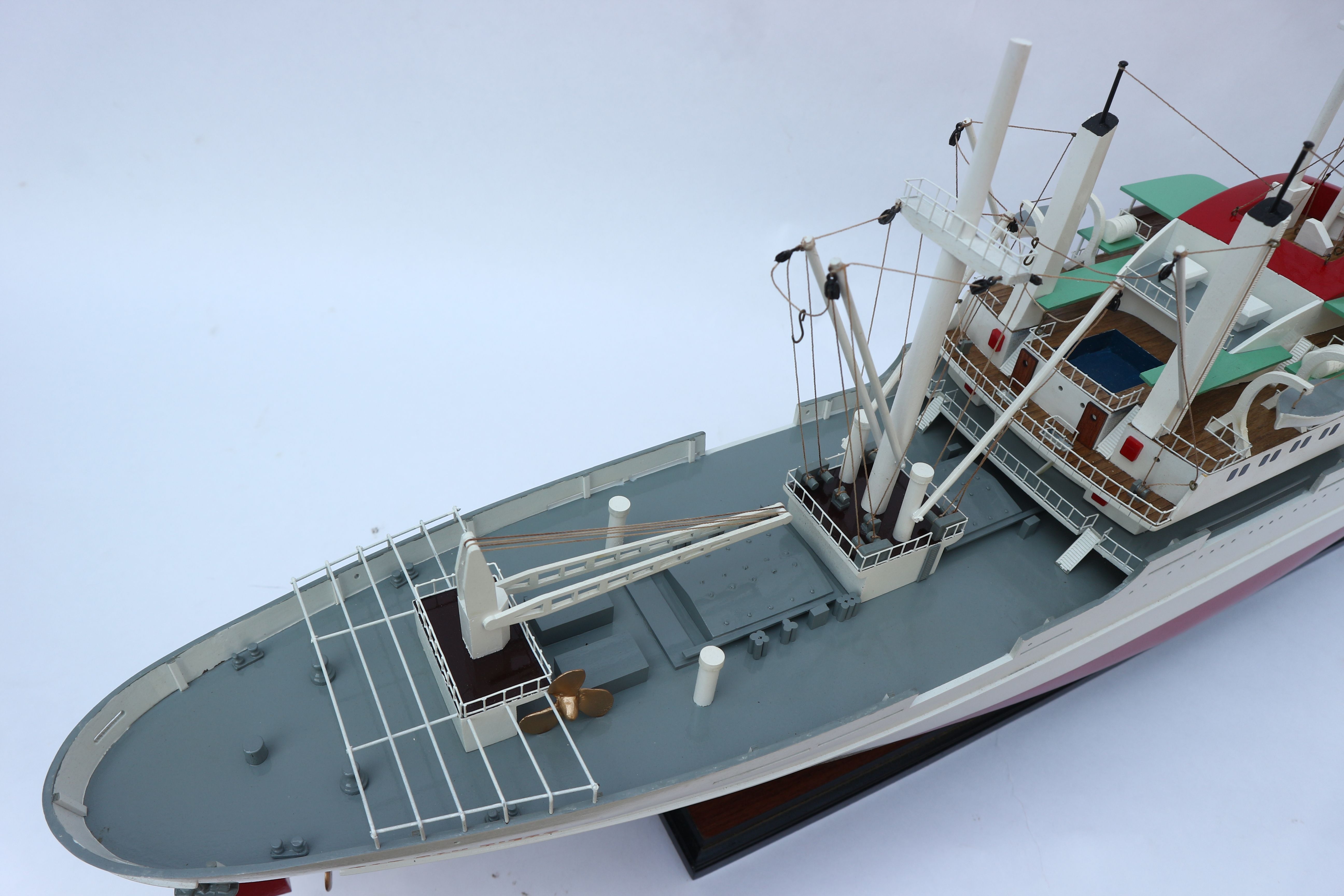 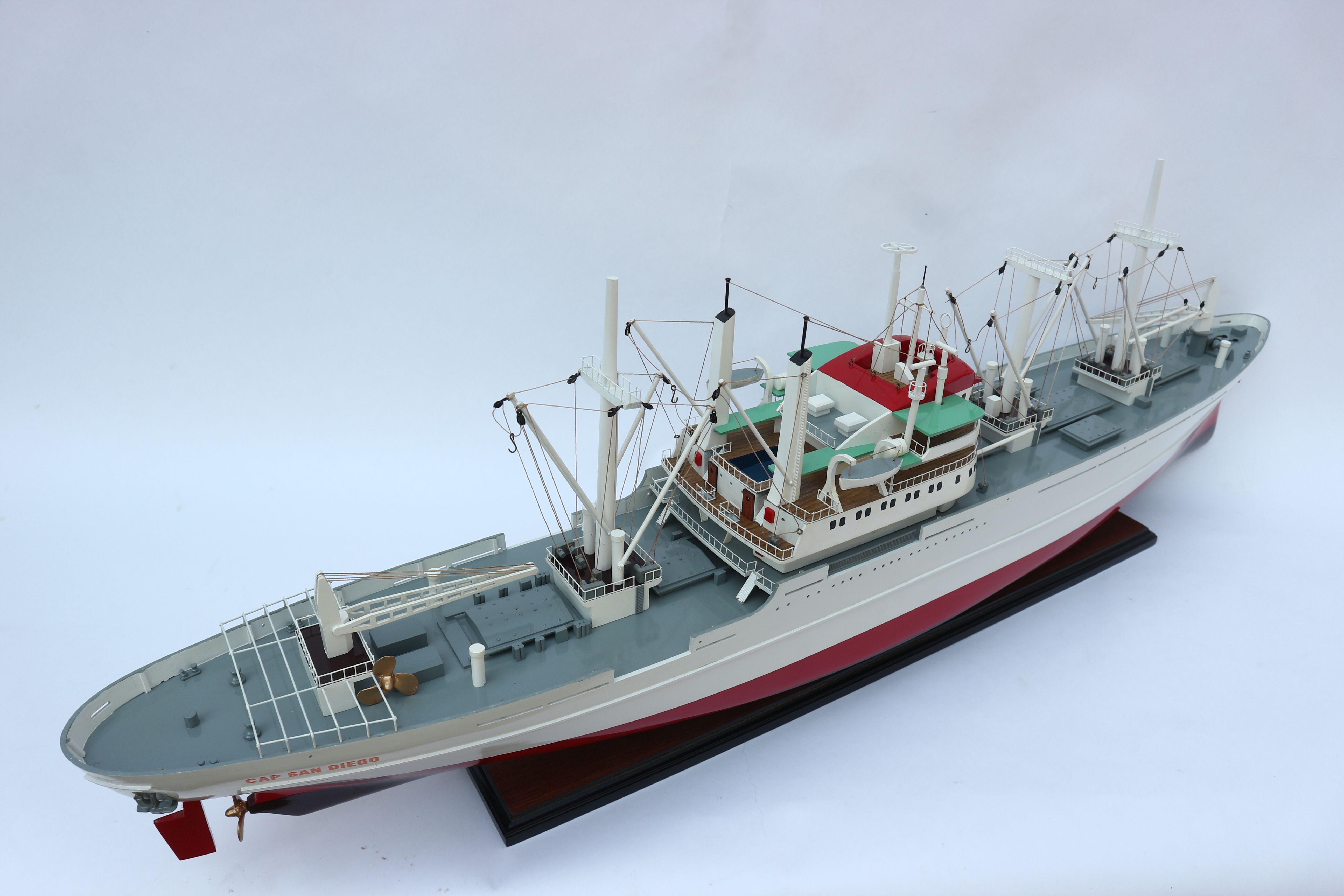 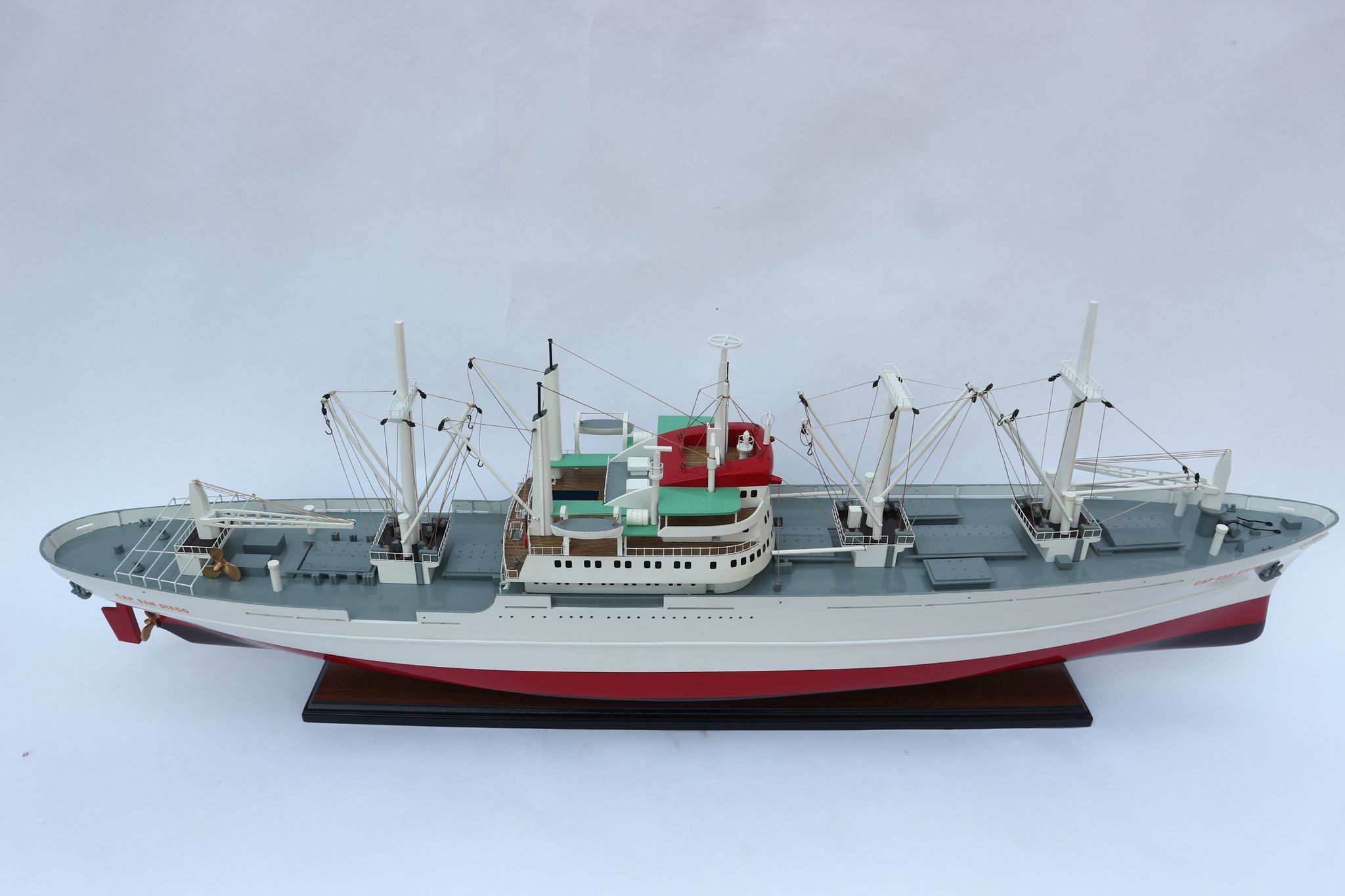 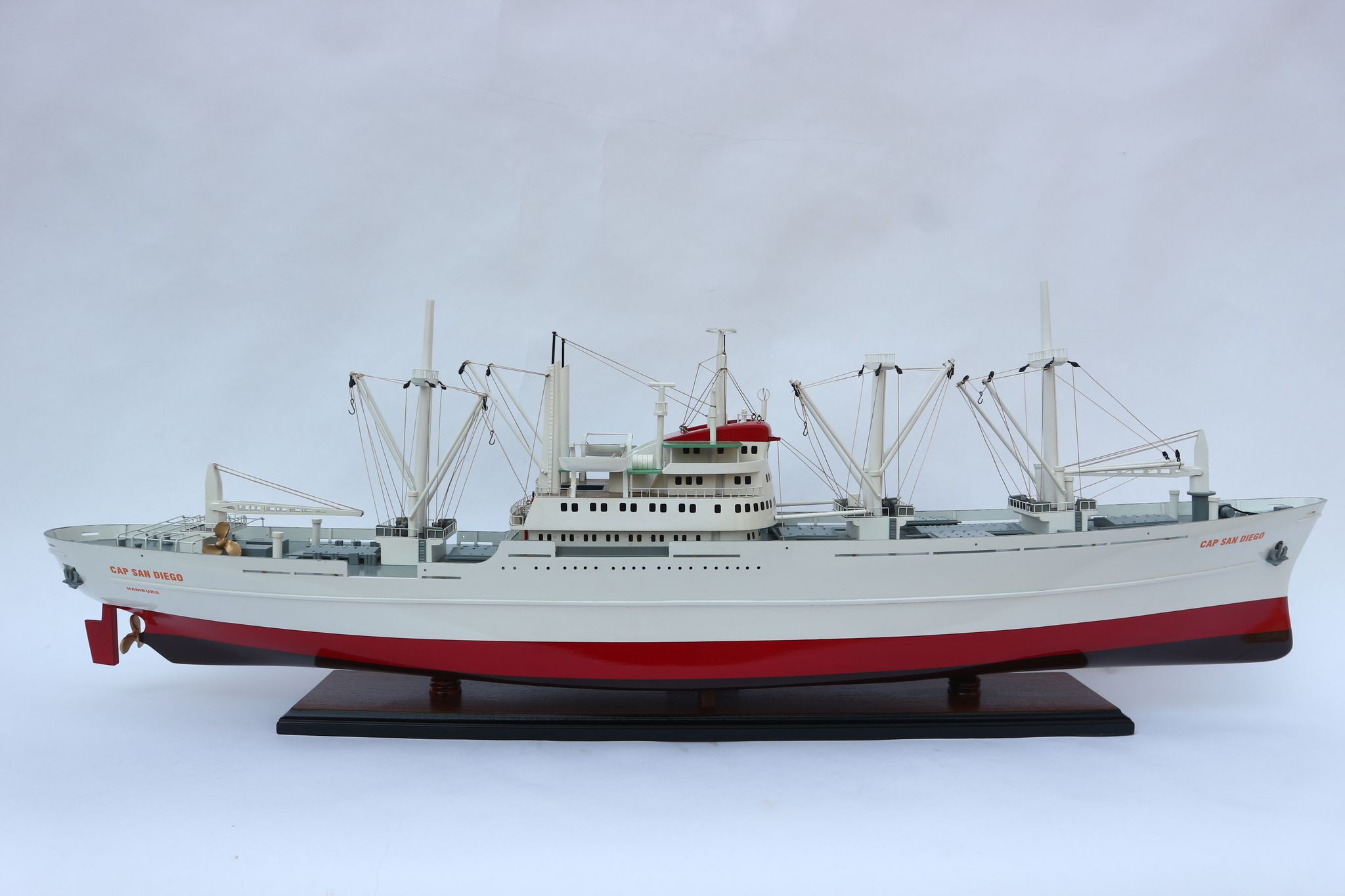 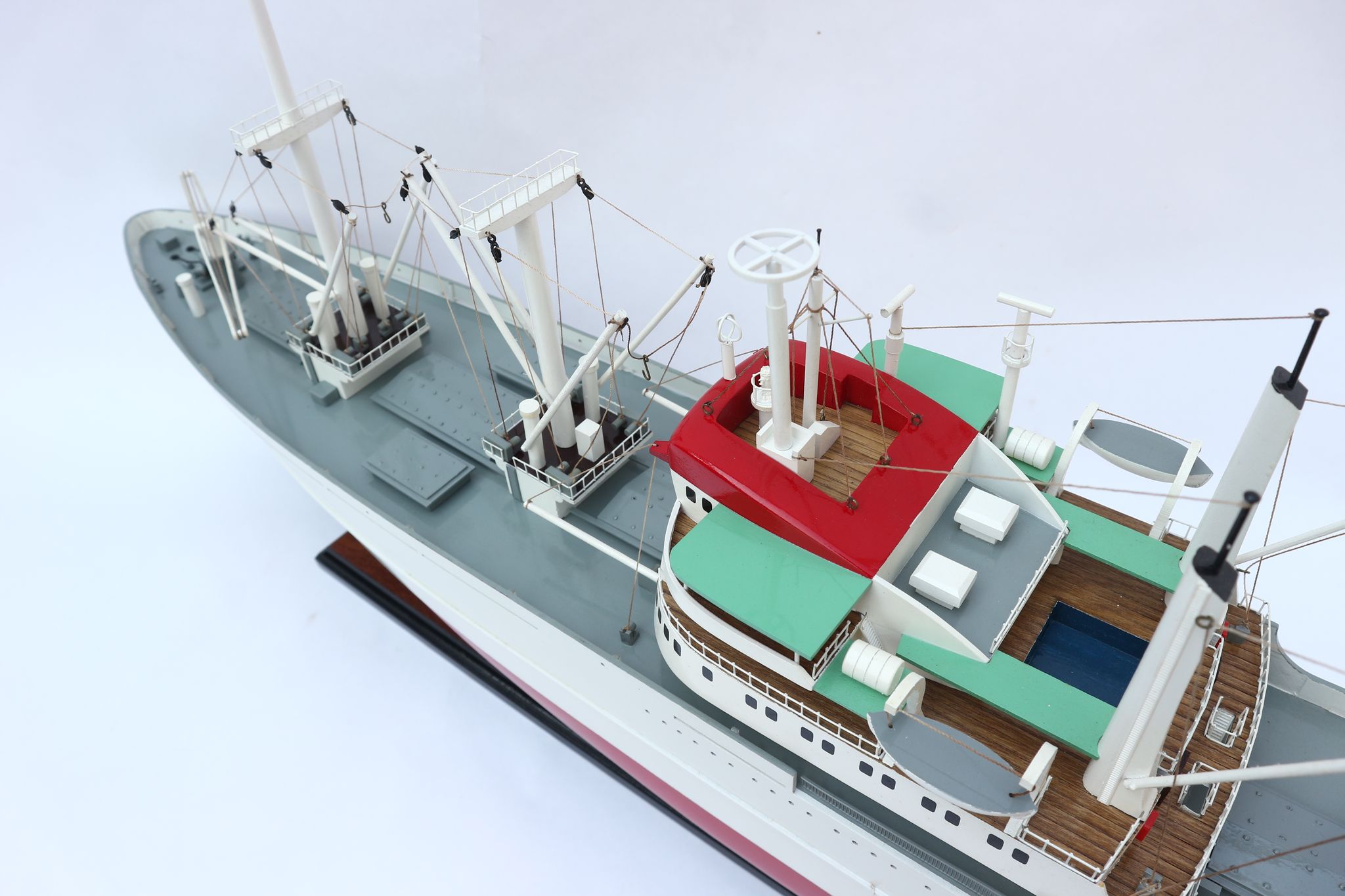 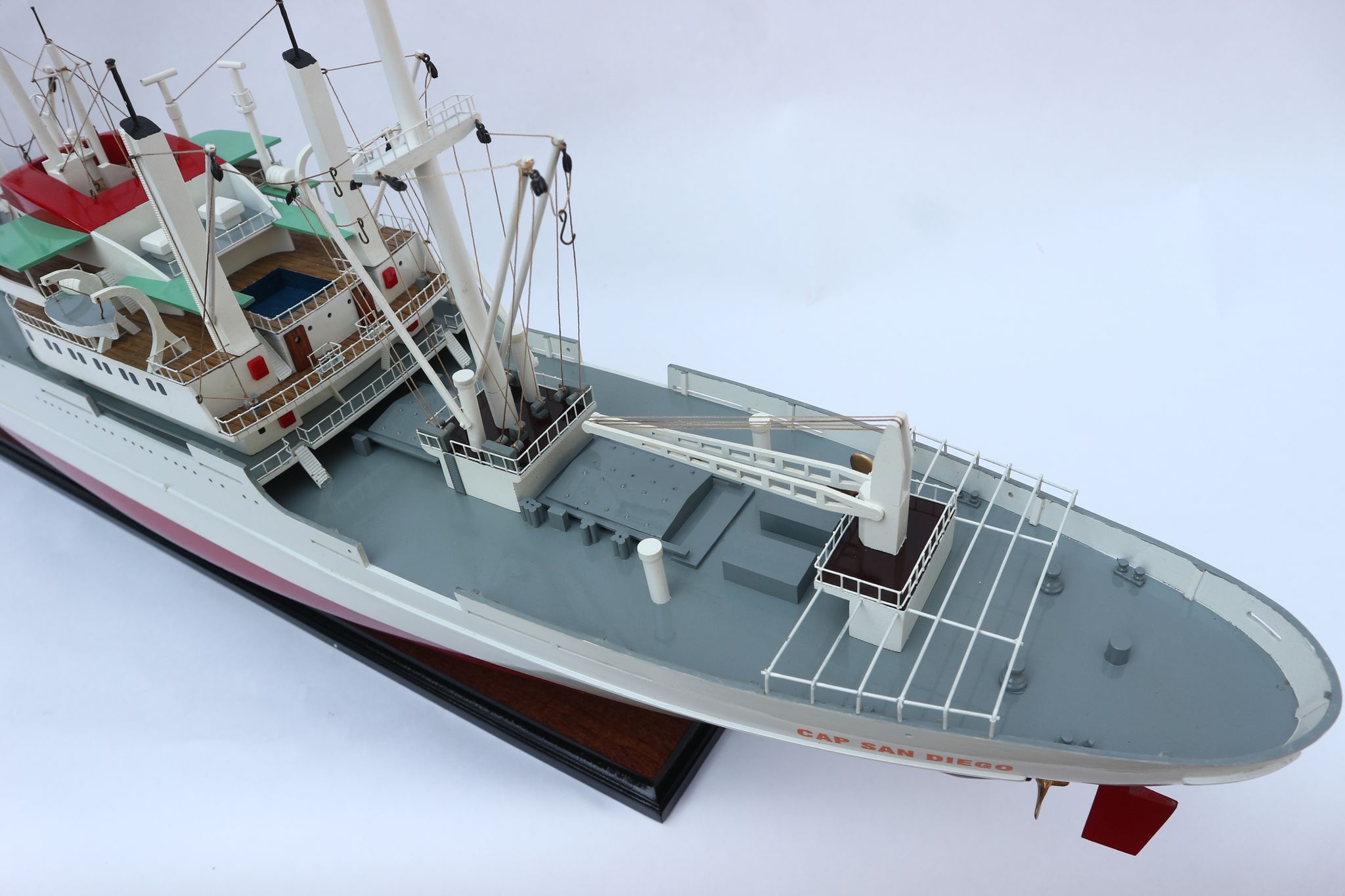 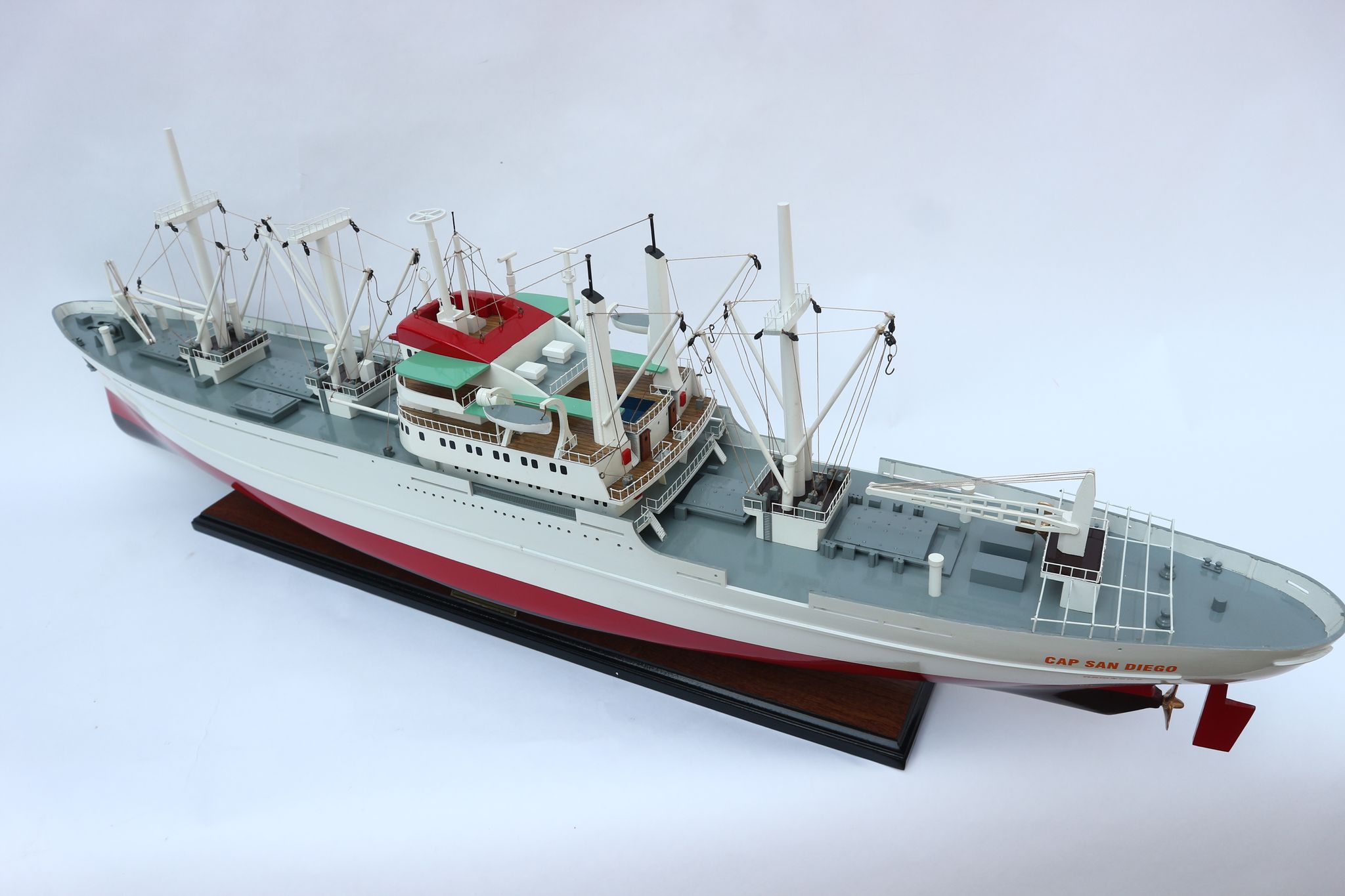 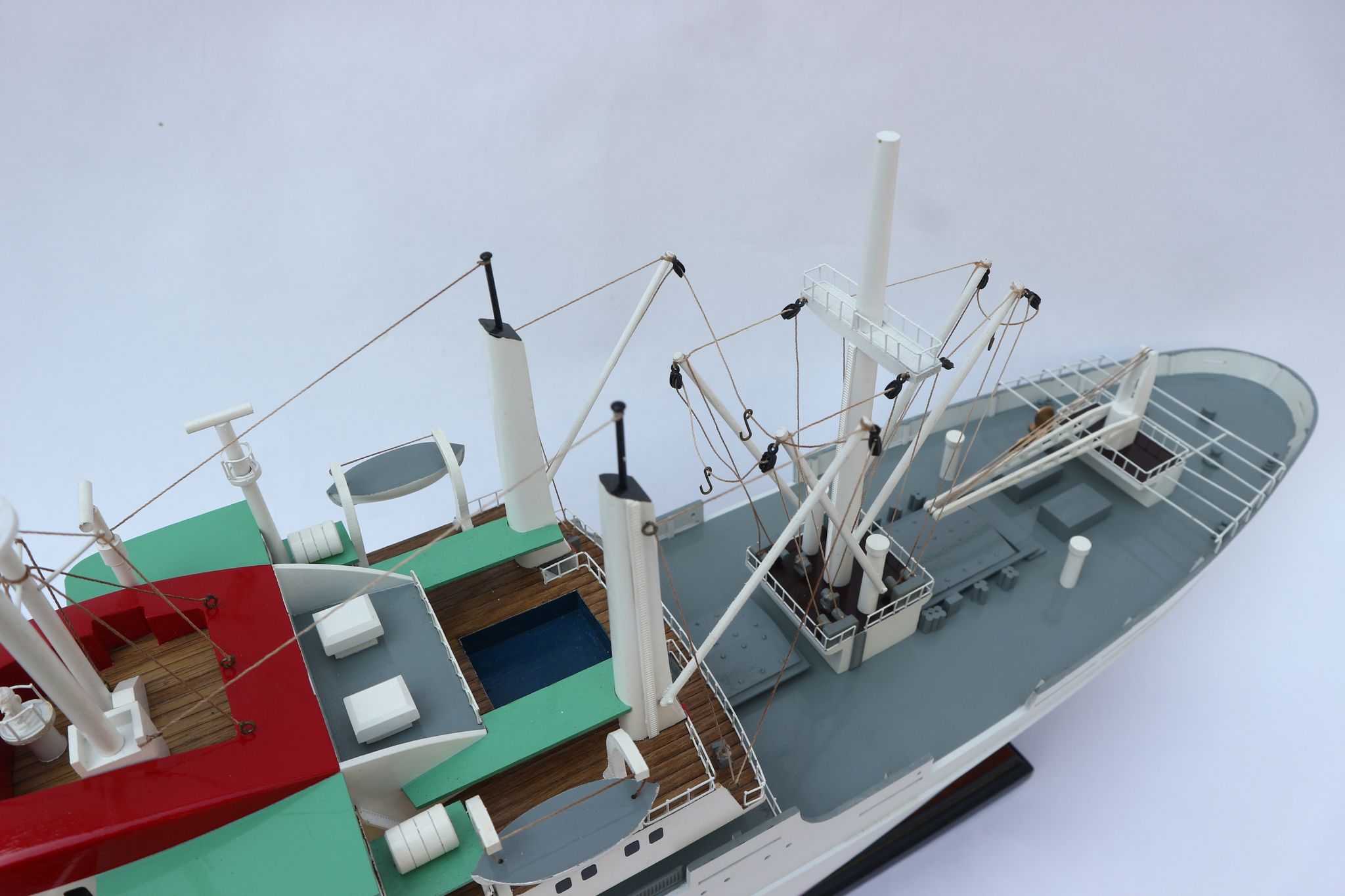 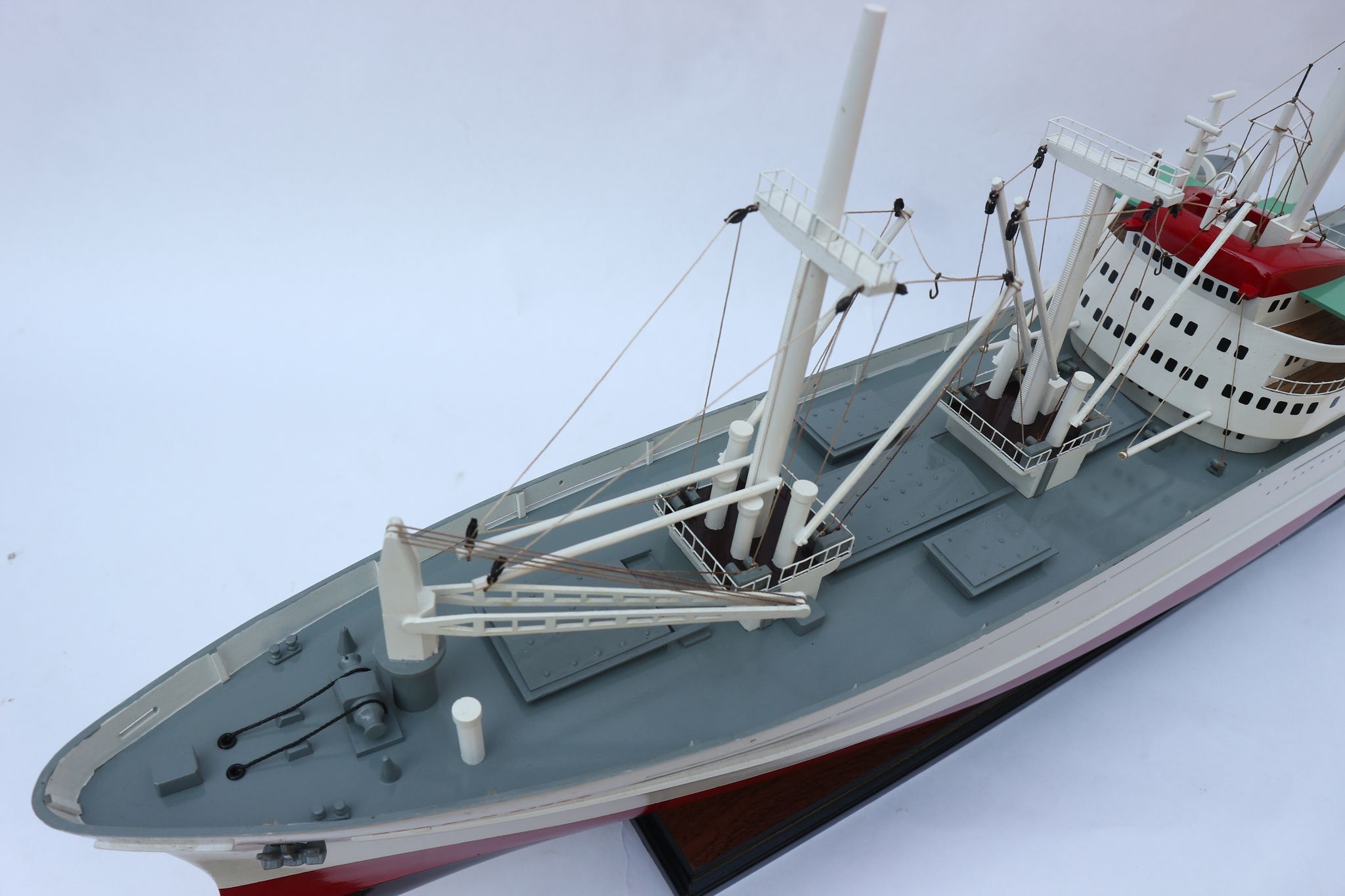 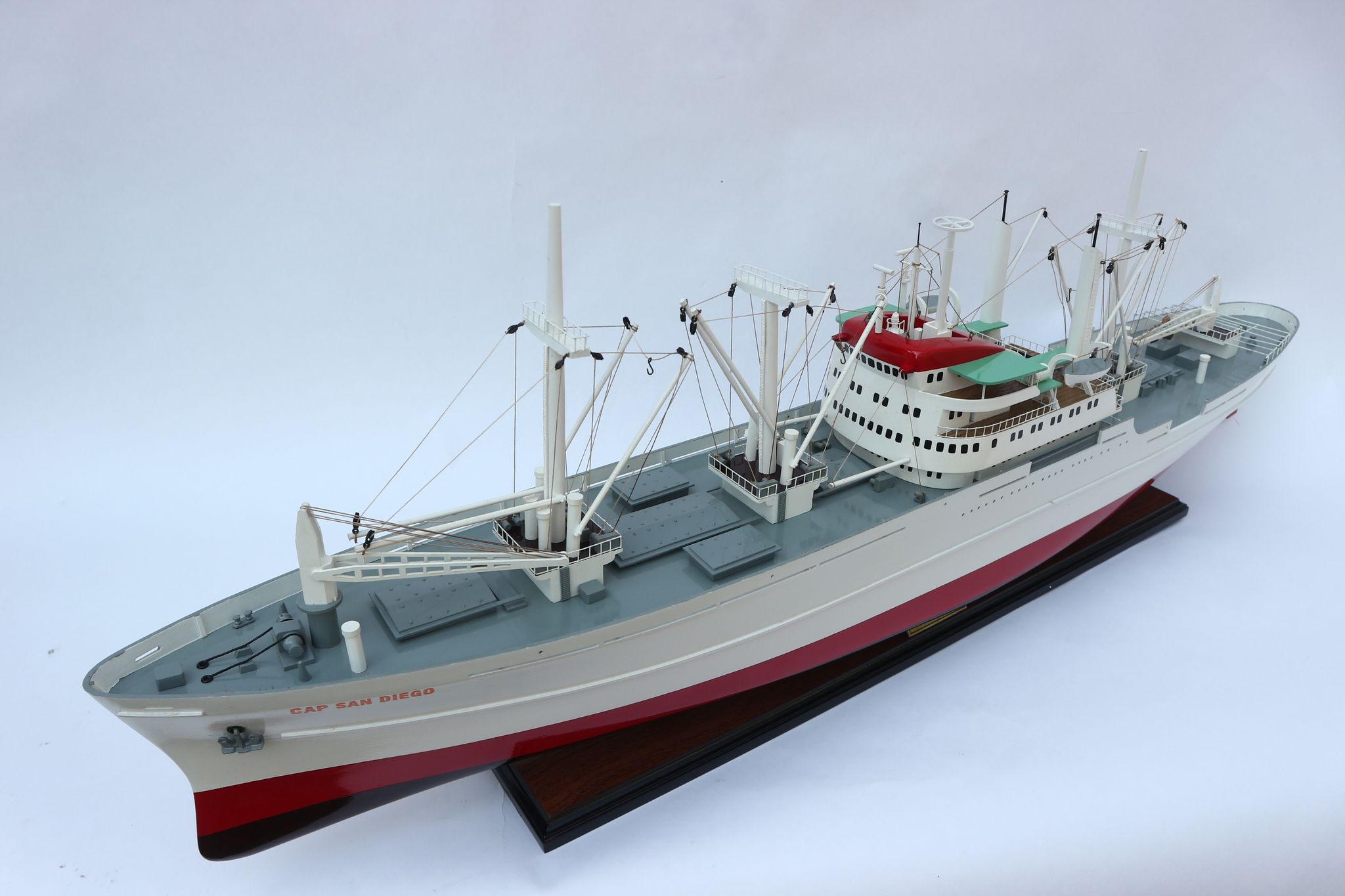 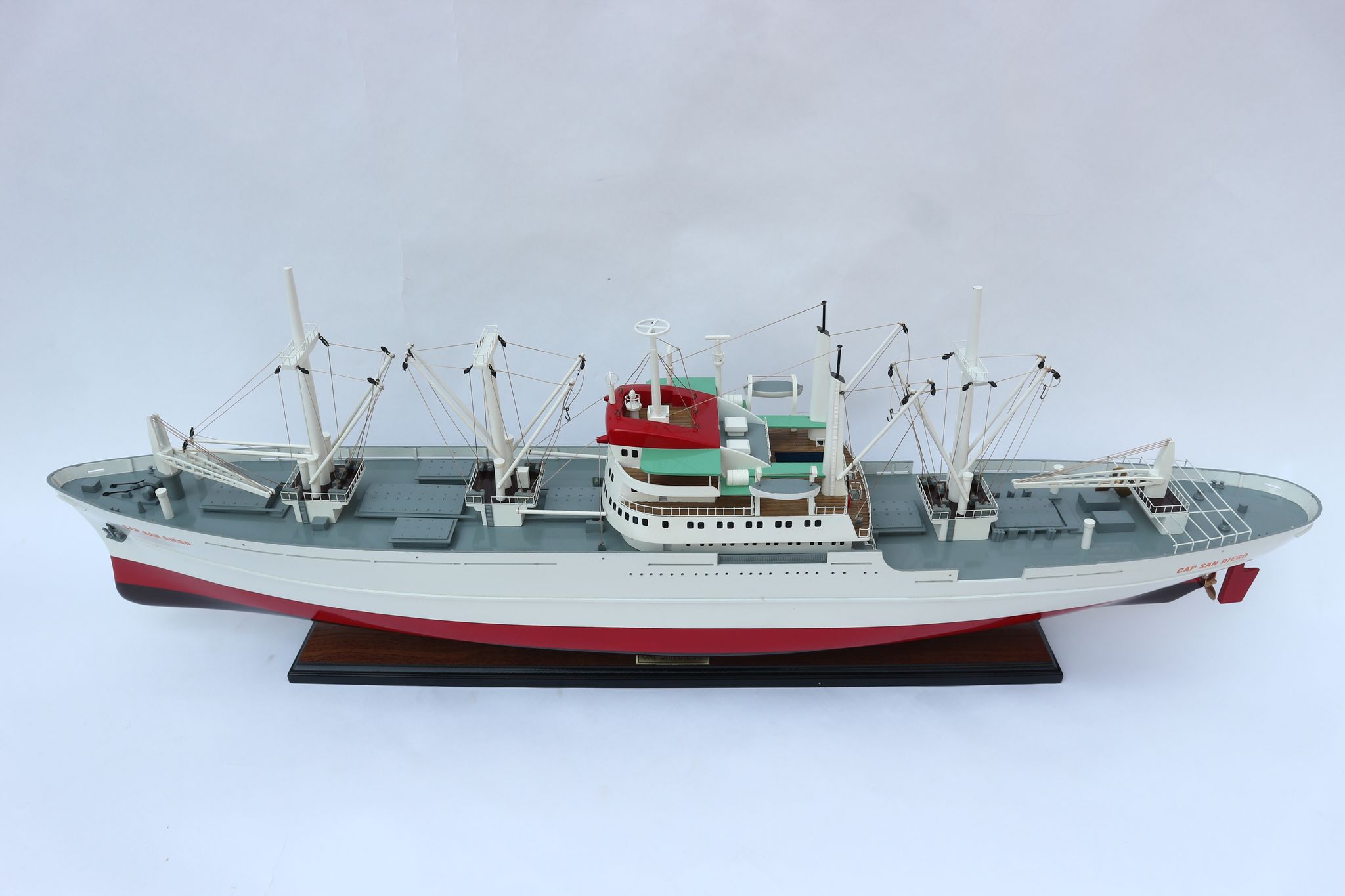 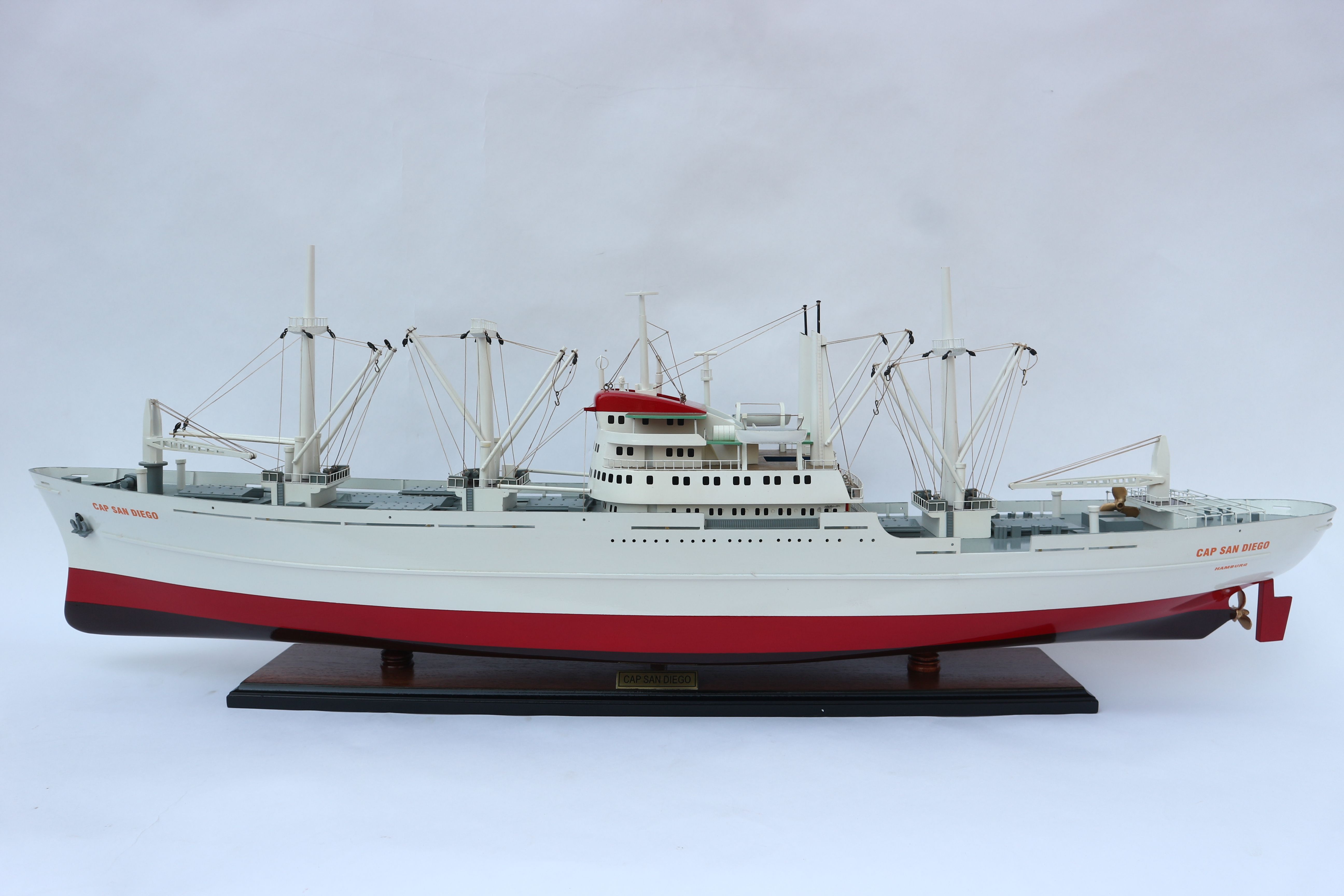 About the MS Cap San Diego

The MS Cap San Diego was built in 1962 for Hamburg Süd Reederei and is the last of a series of six sister ships, referred to as the ‘White Swans of the South Antlantic’. Known for their elegant and slender structure, these cargo ship were designed by the marine architect Mr. Casar. A hallmark feature of the Cap San series was the bright red round bridge roof, which stood out against the rest of the ships’ white silhouette. Between 1962 and 1968, The MS Cap San Diego sailed between Hamburg and South America, serving as a freight and passenger line and transporting goods such as coffee, coTon and cocoa. The six Cap San sisters marked the pinnacle of German passenger-cargo liners. Built for both speed and space, the MS Cap San Diego was able to carry around 540,000 cubic feet of goods. Additionally she was equipped with fully refrigerated holds, allowing for the transportation of frozen and perishable goods. The Cap San Diego also contained oil tanks, for the transportation of palm oil. Aside from transporting goods, the Cap San Diego was fully equipped to accommodate her passengers on board, providing luxury cabins and facilities. She had several lounges, dining rooms, bars and a main passenger deck that spanned the width of the ship. Although the ship was scheduled for scrapping, she has been moored in Hamburg and preserved as a museum ship. Visitors can now access and tour all parts of the ship, which have been carefully restored. To add to this, the MS Cap San Diego is sell operational and departs for a tour of the river Elbe several Fmes a year, on special occasions.

The MS Cap San Diego model ship has been scratch-built by master craftsmen, using her original plan and photographs. The model has been replicated in all her beauty, with her signature red accents on the hull and the roof. This model requires hundreds of hours of work before completed and undergoes a stringent quality control process before leaving the workshop. The team of master craftsmen make use of their skills and expertise to build the hulls and bridges exclusively out of hand-picked hardwoods. Also used for building real-life ships, the construction method is known as the plank-on-frame technique, and takes years to master. In order to create a smooth finish, the model ship is sanded and varnished, before the painting begins. The details on this ship have been replicated using polished brass and metal finishes. The MS Cap San Diego model ship would make an exquisite addition to any space. The model is mounted on a solid wooden base and includes a brass plate. This model is not a kit and is ready for display.

At Premier Ship Models, we are committed to building quality partnerships. With more than twenty years of experience, our manufacturers are specialised in the manufacturer of luxury cramped model boat and ships. What originally began as an artisan family workshop, now produces an extensive range of highly sought-aMer collectibles; Including classic speedboat models, historic tall-ship models, cruise ship models, moderns yacht models and battleship models. These ship models are carefully hand cramped and made from the highest quality hardwoods, sourced from local exotic wood resources.