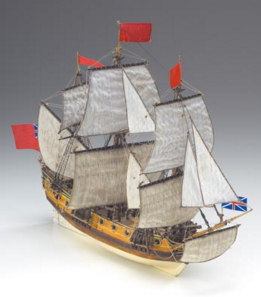 In 1760, the British Empire came under new rule, when George III arose to the throne of Great Britain and Ireland following the death of his grandfather, George II. The reign of King George III was blighted by war and conflict, which increased the demand for ships in the Royal Navy. The HMS Peregrine was one such ship commissioned by King George III, although typically did not take part in the larger battles.

King George III could not avoid conflict during his time on the throne, defeating the French first in the Seven Years War and giving the Empire dominance in the North America/India region. Later, he faced the revolt of the American colonies in the American Revolutionary War and eventually battles against Napoleon in the late 17th and early 18th Century.

This level of conflict puts in to perspective why King George III and the Royal Navy were in need of war-ready vessels like the HMS Peregrine. She was not armed to the teeth however, and her reduced size made here incapable of taking part in larger battles such as the Battle of Waterloo in 1815. She was therefore typically used for the purposes of protecting cargo ships, transporting important messages across the breadth of the Empire and for the transport of Lords and Ambassadors.

Details of the model boat kit

This kit is manufacturer by Italian-based company Corel, who have a reputation across the modelling community for producing fine quality and minutely accurate replicas of boats, typically historical vessels. We have had the pleasure of supplying Corel Kits to our customers for many years, and have always received positive feedback upon their receipt and eventual build of the boat.

The HMS Peregrine kit is built to Scale 1:96 and includes all the parts necessary to reconstruct this ship of King George III. It is a double plank-on-bulkhead kit with burnished metal cannons, rigging, and all the fixtures and fittings that the real ship had. The instructions are all in English and the build should be fairly straightforward, even for a beginner. If you have any questions throughout the build, please do feel free to contact us and we will be happy to offer any assistance we can.