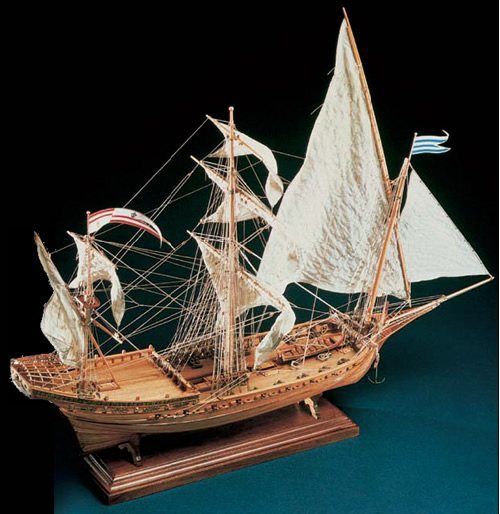 This model kit is a scaled reproduction of the Mistique, a French historical ship built during the mid 1700’s to fight against privateers, brigands and pirates. The French Empire grew massively during this period of history and as they discovered and colonised more areas of the world, they established new trade routes and began exporting and importing more and more goods.

This meant that there was a greater demand amongst the French for merchant vessels, which could carry hauls of good across long distances between one port and another. Unfortunately, as these merchant vessels increasingly came to the attention of pirates, it meant that trading across the oceans was becoming riskier. It was because of this that the French developed vessels like the Mistique, which was not only capable of carrying large quantities of cargo but also capable of defending herself through the use of 18 cannons.

Equally, as France was at war with several nations during this time, it was the right of private ship owners living in the enemy nations to attack French merchant vessels at will with no consequences. This led to the term ‘privateers’ and they proved to be a huge problem for nations wishing to trade across the world. This was another reason why the French developed ships like the Mistique, which were extremely effective in fighting against privateers.

The mistique was also rigged with 3 large triangular sails, which increased her speed on open waters and allowed her to escape enemies. The speed was also good for carrying our merchant missions quicker. The large bowsprit and 3 triangular sails also made the ship very agile, which was good for defensive purposes and for navigating ports.

This model boat kit is manufactured by Corel S.R.L, an Italian-based manufacturer of fine scale replicas of mainly historical ships. Corel use laser technology to pre-cut parts and provide instructions in English so that the build process is as easy as possible. Therefore, this kit would be suitable for a modeller starting out their journey or for those more experienced who are looking to add to their collection. To view other model kits by Corel, please click here.

Corel have a good reputation amongst model makers for producing highly detailed and good quality ship model kits. The kit uses plank on frame construction and is finished in scale 1:50. If you have any questions about this kit, please feel free to contact us and we will do our best to help. Worldwide delivery is available.