Edward Teach, more commonly referred to as ‘Blackbeard,’ was a feared and revered English pirate who primarily operated around the West Indies and the eastern coast of Britain’s North American colonies between the late 17th– and 18th-centuries. He sailed aboard the Queen Anne’s Revenge which was launched around the year 1710, to be used as a merchant service ship. As a man, Edward Teach was thought to be highly shrewd and calculating, and he often refused to use violence and instead relied on the fear surrounding his persona and image. His nickname derived from his thick black beard, and he also had tied lit fuses on the underside of his hat. After his death, his story was greatly romanticised, and in his martyrdom, he became a key source of inspiration for many pirates and villainous characters across all sorts of fictional media. 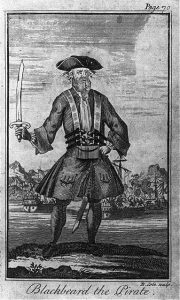 - See Above: An early drawing of Blackbeard

Hardly anything is known about Blackbeard’s younger years. Many historians theorise that he died between the ages of 35 to 40, and his date of death was the 22nd November 1718. Hence, he must have been born in around 1680. Whilst he goes by the moniker of ‘Blackbeard,’ and several records claim his real name was Edward Teach, many other renditions of his name actually exist in other records. He has also been referred to as Edward Thatch, Thach, Thache, Thack, Tack, Theach and Thatche. An early source even claims his surname was Drummond, which is obviously unlike any of the other spellings, however, a lack of documentation to support this theory makes this highly unlikely, and it’s possible this ‘Drummond’ was confused with Teach by whoever recorded said source. What is important to remember is that pirates habitually used fabricated names to avoid damaging the reputation of their family names, so it’s actually possible that Blackbeard’s true name will never be known.

A common theory deduces that Teach may have been a sailor aboard privateer ships during Queen Anne’s War, before settling on New Providence; a Bahamian island and a base of Captain Benjamin Hornigold. Teach would eventually join Hornigold’s crew in around 1716. Before this, however, it’s likely Blackbeard was raised in Bristol. The rise of Britain’s American colonies in the 17th-century, and the subsequent expansion of the slave trade across the Atlantic meant that Bristol was a vitally important international sea-port. Unlike many pirates, Blackbeard was believed to have been literate. After his death, he was found in possession of a letter addressed to him by the Chief Justice and Secretary of the Province of Carolina, Tobias Knight. This piece of evidence led Robert Lee, the author of ‘Blackbeard the Pirate,’ to speculate that Edward Teach could have been born into a rather affluent and well-respected family. Teach may therefore have arrived in the Caribbean in the closing years of the 17th-Century, perhaps on a merchant vessel or even a slave ship. An 18th-Century author, Charles Johnson, claimed that Teach was a sailor operating from Jamaica during the War of the Spanish Succession. Johnson wrote ‘A General History of the Robberies and Murders of the most notorious Pyrates.’ There is however, no record of a captain who went by this name, but he said that Blackbeard “often distinguished himself for his uncommon boldness and personal courage.” In keeping with most of his life, though, the time at which Teach became a pirate is unknown. 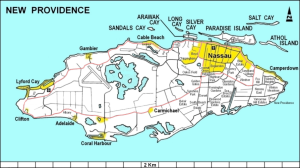 - See Above: A Map of New Providence

After joining Hornigold’s crew, Blackbeard was delegated to be in charge of a sloop which he had captured himself. With Hornigold alongside, Blackbeard engaged in countless acts of piracy and general misdemeanour. The size of their fleet continued to grow in tandem with their notoriety, and in 1717, Hornigold retired, leaving Blackbeard in charge of the fleet.

He captured a French slave ship called ‘La Concorde,’ and renamed her Queen Anne’s Revenge. She was equipped with forty cannons, and required a crew of more than 300 men. The enormity of the ship was largely unprecedented for a pirate ship, and he used her and his fleet to blockade the port of Charles Town in South Carolina. The ship itself was a 200-tonne frigate, and it measured in at almost 32 metres in length. Blackbeard allegedly sailed her under a menacing black flag complemented by a horned skeleton piercing a bleeding heart with a spear, however, there’s no accurate description of any specific flag used by Blackbeard during his years of piracy beyond short extracts such as “bloody flags.” 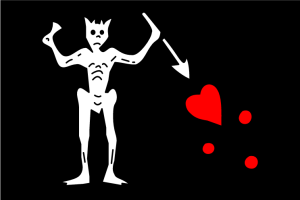 On the 10th June 1718, Blackbeard ran Queen Anne’s Revenge ran aground while entering Beaufort Inlet, North Carolina. He disbanded his fleet and escaped via a smaller ship, the ‘Adventure.’ He then stranded some of his own crew members on an island who were later rescued by Captain Stede Bonnet. A number of historians believe Blackbeard purposefully ran Queen Anne’s Revenge aground so as to deliberately disperse his crew. 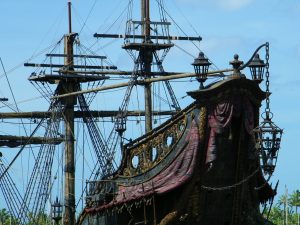 He surrendered and accepted the King’s Pardon for himself and his remaining crewmen from Governor Charles Eden at Bath, North Carolina. However, Blackbeard was back at sea and returned to piracy for several months, before being killed in combat on 22nd November 1718. He had attracted unwanted attention from the Governor of Virginia, Alexander Spotswood, and he arranged a party of soldiers to capture Blackbeard. The squadron was led by Lieutenant Robert Maynard, and after a ferocious battle, Blackbeard was shot and stabbed, before succumbing to his wounds.

Premier Ship Models offer a ready-made model of the fearsome Queen Anne’s Revenge, complete with billowing white sails and the notorious flag of Blackbeard. Its rich and dark hull brilliantly compliments the lighter wood lining the sides of the vessel, and the highly-intricate rigging makes it a fantastic piece to look at. The ship is a fitting blend of fashion and function, and this excellent model serves as an anecdote and memento to honour the fearsome legacy of a once-great pirate. You can follow this link to check out our model rendition: 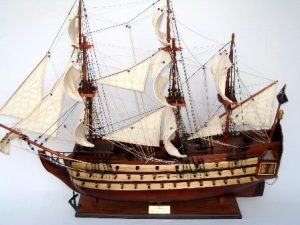 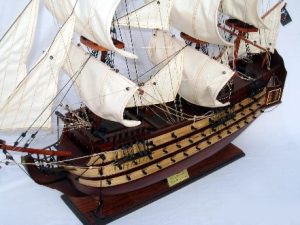