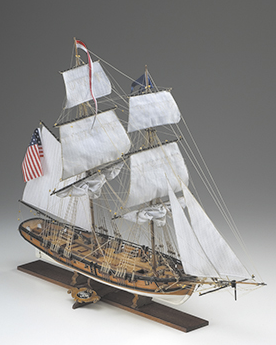 The Eagle American Brig was an 11-gun sloop built in the early 1800’s, measuring at 64 ft long with a beam of 20 ft 4 in. Using sail propulsion, she was fitted for naval service after being purchased in Vermont in the year of 1812.

The majority of her life at sea was spent in Lake Vermont, where the British captured her in 1813. She was under the command of Sailing Master J.Loomis and a member of Commodore Thomas Macdonough’s squadron. The ship and her commander’s primary responsibility was to block the British advance from Canada.

Major George Taylor of the 100th regiment successfully captured the Eagle American Brig on the 3rd June 1813. Her capture took place on the Sorrell River near Ile aux Noix, on the Canadian side of Lake Vermont. The fight that led to her capture was 3 and a half hour long, over the course of which 3 British men were wounded and 1 American was killed, along with an additional 8 wounded.

After her capture, the British renamed her HMS Finch, and she accompanied them on an expedition to burn arsenal and storehouses at Plattsburg, New York. By this point, she was under the command of Lieutenant William Hills. His command and the ship became more imperative when they were used in the Battle of Lake Champlain, also known as the Battle of Plattsburgh.

It was in this battle that the Eagle American Brig was ordered to engage USS Preble, a seven-gun sloop. In attempting to do this, she left the USS Ticonderoga with an opportune moment to fire on her. This chance was pounced upon, and the HMS Finch lost all her rigging. She ran aground near Crab Island, where American troops began firing on her. The captain then decided to strike the colours, removing the flag and claiming surrender.

After the war, she was sold in July 1815 in Whitehall, New York.

This model boat kit is a replica of the Eagle American Brig. It is manufactured by Corel Kits, an Italian supplier with a reputation for producing fine scale models, accurate representations of the original vessels and high quality kits that customers are happy with. Premier Ship Models is glad to be supplying this model ship kit to our customers, and can ship the kit worldwide. Please contact us if you have any questions.