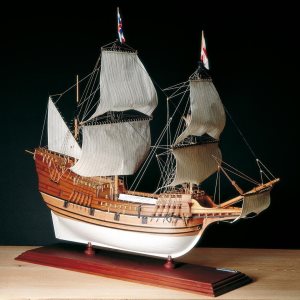 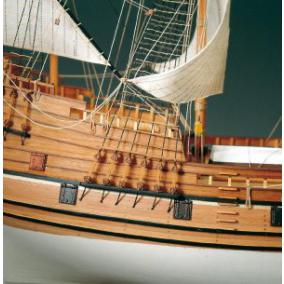 Amati S.p.A are and italian based manufacturer which have been producing the highest quality wooden model boat kits for over 60 years. Their range of model boat kits appeal to both the period model boat builder and the radio control modeller alike. Amati also supplies some of the highest quality period fittings and materials for the model boat building enthusiast. The model ship kit includes pre-cut wooden frames and decks, wooden strips for planking and grating and metal accessories & fittings.

Although this little ship brought the Pilgrims to Plymouth Rock in 1620 is one of the most celebrated vessels in U.S. history, facts concerning her origin and ending are obscure. The first definite record relates back to 1609 when there is a mention of a Mayflower of London, part owned by Christopher Jones.

This ship plied the seas chiefly between England and the French Biscay ports of La Rochelle and Bordeaux. Mayflowers charter was eventually arranged through the Merchant adventurers (including the Virginia Company), who could grant landrights in the America’s for the Separatists who wanted to settle in the New World. In July 1620, the separatists sailed from Leyden in Speedwell for a rendezvous with the Mayflower at Southampton. Both ships sailed in company with ninety pilgrims aboard the Mayflower (under Captain Jones) and thirty more on Speedwell.

Unfortunately, the latter was in no condition for a transatlantic voyage, and at having docked at Plymouth, they realised they only really had one vessel. About 20 of the passengers decided against the journey, and the ship finally sailed from Plymouth on September 6, 1620 with 104 people on Board. They were subsequently referred to as pilgrims and the first child born at Cape Cod was named Peregrine, or pilgrim. A child was also borne on board and was named Oceanus Hopkins.

They saw land on November 9, 1620 at Truro, Cape Cod and on November 11, they anchored at Province town harbour. Before going ashore, 41 of the passengers signed the Mayflower Compact their operand modis. After a few expeditions, they settled at a harbour referred on their map as Plimouth”. Although the first winter was hard, in the spring they met an English-speaking Indian (he had previously been enslaved and learnt English). Squanto provided inestimable help to the fledgling pilgrims. By April 1621, half the crew had already died, but things improved thereafter.

The Mayflower left on April 5, 1621 and arrived in England no more than 31 days later. Mayflowers history at this point becomes something of a mystery. She was mentioned twice in connection with Captain Jones and his widow in 1621 and 1624. What happened thereafter is unknown. In 1956, naval architect William A. Baker designed a replica of the Mayflower based on the interpretations of the original pilgrims and ship designs of that age.

In 1957, under Alan Villiers, a crew of thirty-three sailed the replica from Plymouth, England to Plymouth Massachusetts, in fifty-three days. She has been on exhibit at Plimoth Plantation ever since. Baker, Mayflower and other colonial vessels.New Mayflower. Caffrey; Mayflower. Hackney, Mayflower. Villiers, How wesailed Mayflower II to America.

Please contact us for any more information or help in choosing the perfect model kit.

Sorry we have no extra information for this product
This Vessel Type is Galleon
Copyright © 2022. UK Premier ship Models. All Rights Reserved.