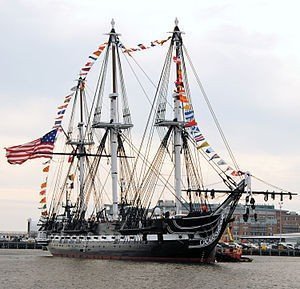 Manufactured in the Massachusetts at Edmund Hartt’s shipyard, renowned builder Edmund Hartt’s Shipyard built this ship. In her early days, she was responsible for providing protection to the American merchant shipping. It was the time of Quasi-War with France. She also assisted in defeating the Barbary pirates in the First Barbary War.

USS Constitution is most recognised for her performances during the War of 1812, which was fought against the United Kingdom. In this war, she captured a number of merchant’s vessels and defeated five British warships. These battleships were HMS Guerriere, Java, Pictou, Cyane, and Levant. She also participated in the Guerriere battle that earned her the nickname of “Old Ironsides.” The love and admiration of public have frequently saved her from scrapping.

USS Constitution also served as a training ship for the Naval Academy of the United States during the American Civil War. In May 2015, she went for a three-year restoration program.

Our model ship kits are made with extreme care ensuring that users across all over the world get a pleasing ship-building experience. We understand that building ship model is a creative thing and you want a kit that can help you and provide ease in assembling. Hence, our boat making kit is packed with easy-to-understand instructions. You can browse our huge collection of boat building kits Here

Building a ship model requires necessary tools, which can conveniently assist you in assembling various parts of a boat making kit. These tools include blades, hammer, pins, tweezers and much more. From pin pushers to a cleaver device that help you create a robust frame, we have all the tools that boat model-builder might need. Explore our vast collection of boat building Tool Kits by Clicking Here